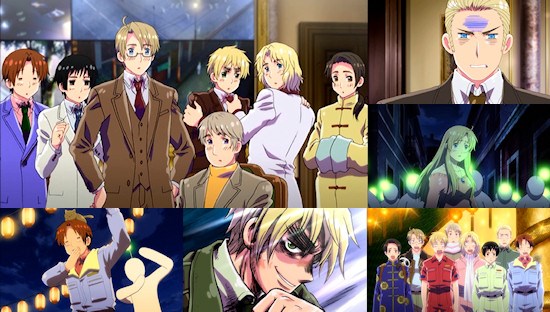 It's been quite a while since we last paid a visit to the wacky world of Hetalia: Axis Powers - over a year in fact, and the UK release of the show's second season.  However, if you've been suffering from withdrawal symptoms in the interim, here we are on the cusp of a DVD release for the franchise's theatrical animated outing - Paint it, White.

With a running time of seventy minutes compared to short episodes amounting to just a few minutes within a normal series of Hetalia, there's clearly far more room for an over-arching plot within Paint it White, and the movie delivers along these lines by introducing us to the Pictonians, an alien race intent on taking over the Earth by (as the film's title suggests) painting everything with a ray of pure, bland white.

Of course, our collection of anthropomorphised countries are having none of it, and set out to defeat this alien threat - at least, that would be the plan if they could actually agree on anything.  It's only once our wide-ranging collection of nations have tasted a colourless but crushing defeat that they begin to work together, thanks in no small part to the advice of a foul-mouthed alien called Bob who just so happens to be America's buddy.  From here, various attempts are made to placate or otherwise convince the invading Pictonians to cease their activity, but it seems that nothing can save the world from their rather unusual desire.  Is it time to wave the white flag in front of a sea of white paint?

Despite this plot to anchor the movie and give it focus, break things down a little more and Paint it White is still clearly a compilation of sketches just like any other episode of Hetalia. Indeed, some of the sketches are even directly recycled from the TV series and dropped into the midst of the story despite having no connection to the whole alien invasion plot, and other new sketches are similarly completely unrelated to the film's central theme.  This mish-mash occasionally makes the movie feel like a rather odd beast, as it switches away almost inexplicably to skits which barely fit in this outing as a whole.

In terms of content itself, the film runs the gamut from the funny to the unimaginatively stereotypical.  There are laughs to be had from the movie without a doubt, but they don't come as frequently as one might like and there are periods of the film where it simply falls back on its characters and their inherent traits over trying to do anything more imaginative - fine if you're in love with Hetalia's personalities perhaps, but it certainly doesn't do enough to mark Paint it White out as a must-see comedy by any stretch.  As per the show's TV series releases, FUNimation Entertainment's American dub is a very different beast in terms of humour to the original Japanese script, aiming for edgier and potentially more offensive fare with mixed results - it's probably funnier than the Japanese language track if you like the kind of thing, but it's just as hit and miss as the original.  Mind you, if you're partial to scones then this film will offend you no matter which language option you select...

One area where Paint it White is certainly an improvement over its predecessors is in terms of its animation quality - it still won't set the world on fire but its big-screen debut has clearly also brought a bigger budget with it, providing us with CG-generated Pictonians and a generally higher level of polish to the movie's on-screen shenanigans.  If one of your major drivers for watch the film is getting to see your favourite country, from Italy through to Sealand, in all their cinematic glory then chances are you won't be disappointed here, and Manga Entertainment's transfer for this UK release is certainly decent enough to do it justice.

Much like the UK release of its TV series (and the third season is on the way not long after Paint it White's release) there's also no shortage of extras on this DVD, which includes a commentary by members of the US voice and production cast, footage of the film's Japanese voice acting cast and explanations of some of the history behind the movie and its characters - yes, there are historical references to be found here, alien invasions notwithstanding!

For the most part, this movie outing of Hetalia: Axis Powers is clearly one that knows its fans and offers up what they desire with accuracy and an additional coat of (mostly white, admittedly) paint to make it a suitably presented experience.  In those terms, Paint it White is a success in offering up its feature-length fare - conversely though, if you didn't "get" the lure of the franchise from watching its original TV series then you won't find anything new to convince you that you're missing something special here.  Take away its character designs and the playful personalities of its main players, and you have yourself a decidedly mediocre animated comedy that lacks the cohesion to even produce a notable storyline as it sticks together its collage of vignettes and sketches.  In short, you probably already know whether you want to pick up this movie or not, and if you are unsure about it then it means that it's most likely not for you.

6
Paint it White enjoys the spoils of a theatrical outing, but under that coat of Dulux is the same old sketch-based fare and all the good and bad things that entails.
LATEST REVIEWS