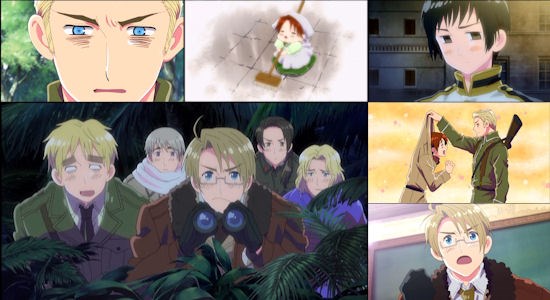 We actually already reviewed the first season of Studio DEEN's anime adaptation of Hetalia: Axis Powers back in June, courtesy of FUNimation's YouTube channel which is still streaming the series to the UK - however, since that time the first two seasons of the show at least have been dubbed and licensed in the UK, meaning that we now have this show in shiny disc form via Manga Entertainment.

As far as the Japanese language, English subtitled track goes little has changed in terms of our opinion of the series - its anthropomorphosis of various countries and nations into (mostly) good-looking young men remains mildly amusing but with its moments of comedy gold too few and far between in a sea of often lazy national stereotypes that aren't offensive, but don't provide a massive amount of comic value either.  In fairness, there is a little world history to be learned from the series too, but you'll have to be quick (or patient enough to use the pause button) to catch some of the screens of English text subtitles which explain some of these historical points.  In fairness, this DVD release boasts as one of its extras a section which explains these elements of history for you to read at your leisure - never let it be said that anime can't be educational on occasion!

This brings us to FUNimation's English dub of the series, which remains broadly true to the general feel and concepts of the series while also sewing threads of its own into that body of work.  For starters, the voice acting cast for this dub have all chosen to adopt horrific attempts at mimicking the accents of the country that they play, giving us predictable takes on "ze German character", "herro, I'm Japan" and a jolly good Brit (for some reason, England has become Britain in the English dub, possibly to keep the Scots and Welsh happy).  These accents are doubtless an attempt at humour in their own right, but in reality they add little to the series aside from a growing irritation once said accents begin to grate on you.

More importantly, the English dub also takes on numerous opportunities to add jokes of its own to its frenetically-paced delivery, often via the use of more "adult" humour - there certainly aren't jokes about dutch ovens or cracks about Jews made towards Germany in the English subtitles, yet they find their way into the dub in an attempt to bolster the show's localised humour.  It would be unfair to claim that all of these added gags and wise-cracks are wasted, as there are a few laughs to be had from them, but as per the series itself these jokes are hit-and-miss and it's a little frustrating when the odd decent joke from the original release is shifted into something less funny in the hands of the English dub.  If you're a purist when it comes to the contents of a dub being true to the original work, then prepare to be disappointed here, although at least you still have the subtitle track to fall back on.

As well as packing twenty-six five minute episodes on to a disc, this DVD release actually finds itself with room for some impressive extras - in addition to the aforementioned "Hidden History Within Hetalia" piece, we're also treated to a handful of audio commentaries from the English voice acting cast and subtitled interviews and comments from the show's Japanese director Bob Shirahata.  Video quality is acceptable but unspectacular here (as you might expect given this show's origins as a series which streamed to mobile phones in Japan), but our only real gripe is the inability to skip opening and ending credits easily as they aren't set as chapters within each episode.  I know, both sequences are relatively brief within a five minute episode, but try watching the same sequences over and over again in quick succession and you'll soon understand why it would be preferable to have an option to skip them.

In general, this first season of Hetalia: Axis Powers still leaves us as apathetic to its charms now as it did when we last looked at it in streaming form.  There's no doubt that the series will be a huge hit and build a large following on account of its characters and their designs, but beyond that its comedic range shows its limitations pretty quickly, and the English dub does little to improve matters.  If you're not excited by the show's bevy of good-looking guys or its core concept of countries depicted as those men, then this is a release you can safely ignore.

English 5.1 and Japanese 2.0 audio with English subtitles (including signs and on-screen text translations).  This single DVD release also contains extras aplenty - "The Hidden History of Hetalia", audio commentaries with the English voice acting cast for episodes 2, 9, 12 and 16, and a handful of interviews with Japanese series director Bob Shirahata.

5
In both English and Japanese, this is a hit-and-miss affair that doesn't have the legs to come even close to claiming a place in the anime comedy hall of fame.
LATEST REVIEWS