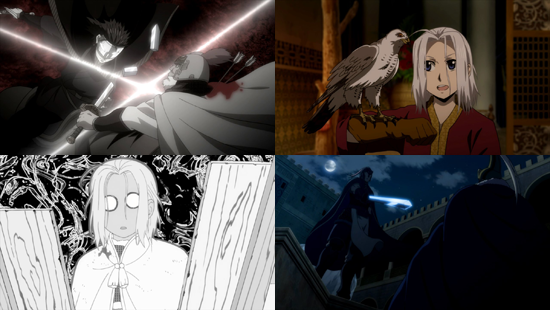 Yoshiki Tanaka is a giant figure in Japan, but for all his presence he's been curiously absent from much of the Western anime fandom. He's best known in the West for his sci-fi epic Legend of the Galactic Heroes but that's only one of the titles that this prolific author has penned which range from paranormal detective dramas to scholarly translations of Chinese literature. While Tanaka's officially-licensed material in the West has been spotty before now - Central Park Media made an earlier attempt to release The Heroic Legend of Arslan and his other fantasy series Legend of the Dragon Kings back in the early Nineties, but there's been little since then - we now seem to be gearing up for a Tanaka Tsunami with Legend of the Galactic heroes in both novel and anime formats and now his other major title The Heroic Legend of Arslan leading the charge for Universal Picture's new anime division. It's a high profile release supported by a wealth of extra content, but as much as Tanaka is a publishing colossus back home, will that colossus break in the long stride across continents?

Whereas Legend of the Galactic Heroes was Tanaka's space opera, The Heroic Legend of Arslan is his fantasy epic. It'd be easy to make the two contrasting counterparts - as well as their similar titles The Heroic Legend of Arslan was written in immediate succession to Legend of the Galactic Heroes (the first volume came out in 1986, shortly before the first run of Galactic Heroes ended in 1987). Also, while it's not reached the sheer scale of its predecessor The Heroic Legend of Arslan has nonetheless accumulated some franchise power behind it too. The anime we're looking at today is actually the fourth distinct adaptation of the books, including two separate manga series from the Nineties and the Tens. The latter has already been available in UK bookshops for over a year and is remarkable for being drawn by Hiromu Arakawa, famous of course as mangaka of the renowned Fullmetal Alchemist. The modern anime is not so much a direct adaptation of the books, more an animated version of Arakawa's manga. Nonetheless, there are important thematic differences - while Legend of the Galactic Heroes was about men seizing the world and making it their own, The Heroic Legend of Arslan is about a boy being given the world, then having to earn it.
It tells the tale of Arslan, a young child prince and heir to the Kingdom of Pars. Pars is a prosperous country on the continental crossroads, but as well as being a merchant hub and bounteous in both fertile fields and rich mines it's also skilled in war - as it has to be when many rival countries covet its wealth. Pars is ruled over by the imperious, forbidding figure of King Andragoras, and Arslan is very self-consciously in his father's shadow. Arslan earnestly wants to do well and grow into a good King but he's not sure how - the King is always off fighting a campaign somewhere and Arslan has little ability to connect with him. The opportunity to do so finally comes as Arslan grows into a teenager and is brought along to fight against the invasion of Pars by the Lusitanians. Arslan desperately wants to prove himself to his father and earn his attention by fighting well, but there are some doubts in his heart as he's come to the uncomfortable realisation that Pars' prosperity is built on the backs of slaves, but the Lusitanians are no liberators. Lusitania is a theocracy preaching that all are equal under God, but it's the equal height of a scythe through hay - anyone outside of God's sight is a worthless heathen to be mercilessly slaughtered with crusading zeal.
However, what's expected to be a triumphant victory over Lusitania is turned into a crushing defeat - betrayed by his closest generals and faced by the black hatred of a figure who hides the disfigurement of a past defeat behind a silver mask, King Andragoras's reputation for invincibility is smashed to pieces and his kingdom overrun. Arslan thus finds himself, very abruptly, thrust into the position of King - a vagabond King ruling ashes on the wind. He used to have a whole regiment beside him and a palace of attendants, but Arslan now has no more than a single loyal retainer as a subject to hail his coronation. Arslan wanted to be a good King, but he's going to have to learn very quickly - does he have the right stuff within him to win new allies, inspire new followers, and build his lonely duo back into an army capable to retaking his phone and freeing Pars from the destruction wrought by Lusitania?
I've long been an advocate of adaptations departing from the source material to refresh, enhance and expand the source material and The Heroic Legend of Arslan does it well here too. The opening episode is an original incident written by Arakawa that wasn't in the original novels, and it's actually an important one that helps to establish Arslan as a sympathetic character that's worth following. The Parsians are slavers, so despite being the protagonists they'd automatically be the baddies to most audiences - when their kingdom is destroyed most probably would see it as the slavers getting their just deserts and resent Arslan for trying to restore it. Arslan's conduct in this opening episode though sets him apart - when an escaping slave with a sword takes some children hostage Arslan gives himself up in exchange for them - so we can appreciate his basic moral courage and sense of decency so even if his background comes from an uncomfortable place we can respect Arslan himself and his potential to change it. The ill-fitted match of the King and Queen is also set up well with a coldly courteous scene between them.

Arslan has a good heart but a body needs a backbone to stand tall. A story is meant to be about Arslan's growth as a leader but he never has to show much effort in that - of the five in his retinue, only one of them, Narsus, he actually has to persuade to join him - Daryun was sworn to him anyway, Elam comes along as a value-add as Narsus's pageboy, Farangis was instructed to join Arslan by a bishop who we never see, and Gieve tags along with the hope of seducing her. However, this is a long series and there is plenty of opportunity for further developments to come, and to the story's credit there is more subtlety to the slavery issue than just crying "let freedom ring!" and everything being happy and solved forever. The twist at the end is painfully obviously telegraphed, but it'll be interesting to see what Arslan makes of it in part two.

Gieve also illustrates that these characters really have no flaws that Arslan as leader would need to use judgement to balance out between them. We're introduced to Gieve after he falsely takes the credit for a deadly commander-killing bow-snipe that impresses the Queen. Gieve is a shameless huckster and he has an excellent, characterful introduction when it's revealed that he's slept his way through the Queen's ladies-in-waiting by charming them with fanciful tales of being a questing prince, but he deftly gives this deception a poetic spin by saying that "we shared in hopeful dreams, which could have grown into fond memories". It would have been interesting if amongst the warriors and hunters in Arslan's retinue for Gieve to have shown a different facet as a rogue who needs to use his quick wits and silver tongue to slip out of tight spots, but when he's not just a master musician and consummate con-man but even also a superior swordsman who gallops into battle as courageously as the heroic knights (would a self-centred con artist really stick around to face down a whole army of crusaders, no matter how smokin' hot Farangis may be?) and can slaughter whole squads of Lusitanian soldiers with wall-jumping acrobatics he becomes just too good and it detracts and distracts from the qualities that made him interesting.

Physical extras in this Collector's Edition include eighty page book of interviews, character profiles and artwork; 12 art cards; 4 collectible character cards; a map of the Kingdom of Pars and a boardgame with forty tokens featuring all the key characters from the series.

You can find our look at the full contents of this Collector's Edition over here.