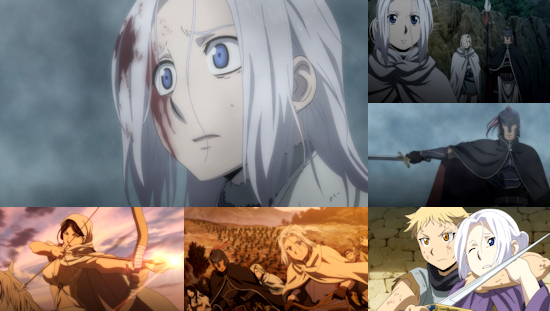 If you aren't familiar with the works of Yoshiki Tanaka, then allow this review to be a brief starting point in your education about this award-winning and prolific writer, whose most famous work is the much-lauded sci-fi "space opera" Legend of the Galactic Heroes. Alongside that particular series of novels sits another, arguably even more epic, series in the form of Arslan Senki, aka The Heroic Legend of Arslan. Although the phrase "epic" is thrown around rather too easily these days, the fact that this particular novel series - based loosely on a Persian tale - has been running since 1986, sporting fourteen volumes and counting at the time of writing, certainly fits that description in our minds, and offers plenty for this new anime adaptation to get its teeth into.

More specifically, this animated take on Tanaka's story is delivered via a more recent manga adaptation, undertaken by Hiromu Arakawa of Fullmetal Alchemist and Silver Spoon fame - mind you, given that Arslan himself sports more than a passing resemblance to a certain Edward Elric in this version of the series, our mentioning this fact may be somewhat redundant!

Arslan himself is the crown prince of the kingdom of Lusitania, a proud nation founded on the back of its fearsome army and prolific use of slaves taken from conquered nations to power it to greater and grander heights. There is nothing that Lusitania and its ruthless king need fear... except, of course, that this kind of hubris all too often leads to downfall. Such is the case here, as a battle against the rival nation of Pars which the king expects to deliver a swift and decisive victory goes horribly wrong in the midst of betrayal and sorcery which conspires against them.

Thus Arslan is left exposed and alone on the battlefield as Lusitania's forces are obliterated, only to be saved by talented soldier and close associate Daryun. With the king himself missing and Parsian forces marching onwards to take Lusitania's capital for themselves, the prince is an obvious target to end any claim to the Lusitanian throne, forcing him to go on the run while also figuring out how to return to, and reclaim, his homeland. As this adventure continues, so Arslan builds up a growing rag-tag collection of talented individuals, all of whom have their own reasons for assisting the crown prince in his seemingly impossible goal.

The first immediately obvious thing about The Heroic Legend of Arslan is the intricacies of the world which is built around the series - the factions, individuals and politics involved mean that a fair amount of world building is required across its early episodes (which will doubtless be off-putting to some), but this allows you to immerse yourself in a rich, considered environment from that point forth as we slowly see layers peeled away to reveal the machinations which have led to the fall of Lusitania and the rise of Pars. Whether its slavery or religion, there's plenty that this series wants to say, and what seem like obvious answers to moral questions such as the abolition of slavery bring about complex answers that throw up all manner of subsequent issues to point out that such topics require heavy consideration.

All of this makes Arslan's historical setting a delight to behold and delve into, and thankfully it's occupied by some great characters too - master tactician Narsus offers brains that matches Daryun's brawn, and other additions to both Arslan's friends and foes feed further into the feeling that you're watching a living, breathing world open out before you rather than a simple work of fiction. In short, The Heroic Legend of Arslan feels "real" in a way which you'll rarely see in a fantasy anime series - yes, it leans upon magic and mysticism on occasion, but for the most part it feels utterly grounded in reality, and that's part of what makes the show work.

Not that the series is all about moralising and pondering its history however - The Heroic Legend of Arslan is brutal in its violence when fighting breaks out, and of course this is a world where torture is part and parcel of conflict too, making for some unsettling scenes that still have enough weight so as not to feel gratuitous. Unfortunately, the show is a bit more hit and miss when it comes to depicting its more grandiose action scenes - its audio treatment is superb (and, we suspect, is possibly mastered with a future theatrical treatment in mind?) and some of its early major battles are excellently depicted, but as the series goes on so it seems to struggle more with animating its set pieces, with some of its one-on-one clashes on horseback in particular proving to be unsatisfying to watch and generally feeling "off" in the sense of movement and energy they provide. Indeed, as a whole the animation of this series is a mixed bag - sometimes it feels right on the numbers, and at others everything seems to collapse under the weight of the sheer scope of what is required to depict events, which certainly serves to lessen the impact of that immersive world we were talking about.

This is probably a large part of the biggest issue that The Heroic Legend of Arslan struggles with as it moves towards the half-way point of its broadcast run - at times it simply loses the passion and feeling of importance inherent within its source manga, leaving you with a terrific episode one week, and an instalment which feels like it's going through the motions the next. When this show its firing on all cylinders its terrific stuff, but every so often a stretch comes along where you feel like the series isn't doing its source material justice.

Taken as a whole though, The Heroic Legend of Arslan is a series that is worthy of your consideration - a story that takes its fantasy setting seriously, and makes good on the considered world that it builds by seeding it with interesting characters and nations that are utterly believable within their setting. If you're looking for grandiose clashes of swords and sorcery then this absolutely isn't the series for you, but as something a little more cerebral there's a lot to enjoy here even if its source manga (available digitally from Crunchyroll and in print from Kodansha Comics) arguably offers a more consistent way to experience this world.

The Heroic Legend of Arslan is currently available in streaming form from Anime Limited, via Viewster's streaming service

7
Its animation and delivery can be inconsistent, but there's no mistaking the exquisite world-building and top-notch story-telling beneath those issues which frequently shines through in this series.
COMMENT AND DISCUSS
blog comments powered by Disqus