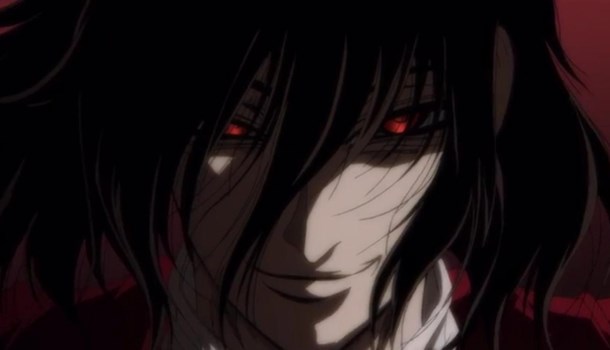 The blood is once more flowing as the fourth volume of Hellsing kicks off. After the quite formulaic pacing of the last volume, hopes are high that everything starts to come to a head in this volume and we see the beginnings of what could end up as quite a titanic battle. At least we hope so.

After the end of the battle from the last volume, we find ourselves back at Hellsing Headquarters as the organisation along with the Catholic Church begin to talk about how to stop the mysterious Millennium and discover the identity of their leader. Although Millennium's leader has many more plans up his sleeve and isn’t afraid to spell it out for organisations in London.

Everything has truly been kicked up a notch. BAM! If there is one thing that Hellsing gets across as plain as day, it's that even the good guys in Hellsing could be considered to be downright evil. Everyone has their own self-interests and each have their own sadistic way of dealing with problems. Killing is a sport and at times it is a damn fun one for them. Arcuard is easily the leader of all this, but what this volume highlights is that while the good guys of Hellsing are completely off their rockers, it lovingly drives home the fact the bad guys are far, far worse. We even see some interesting hints at what drives people to be the sadistic bastards that they appear to be in the series.

Hellsing Ultimate does still have its more grotesque moments, which even the hardened horror fan may find themselves feeling a little squeamish during. Though, at this point of the story, if you're not expecting these extreme violent moments by now then we have to assume you've been watching something else entirely.

If I have had one complaint about the first three volumes, is that it has taken a long while to really get anywhere, especially after volume 3 seemed to be flopping about all over the pace trying its best to actually move ahead. While volume 4 does indeed pick things up, it is still a build up to what looks to be an explosive volume 5. If the pay off doesn't come by the next volume, then we could have some serious problems.

If there is one thing I hated about the Dark Horse adaptation of the manga, it was the need to have the German speaking characters speak with German accents written into the text. Yes it does get it across that he is German, but it does make it damn tough to read. So it's on a positive note that I can mention there is no sign of that silliness for the subtitles. Germans speak in Japanese, we get that they are German, but we don’t have any crazy accents in the subtitles to hammer that point home. Don’t worry English dub watchers, we still get crazy German accents which sound like the Nazis out of Indiana Jones, but I'm sure many wouldn’t have it any other way. Plus the Nazi speech is brilliant with the German accent in English, in a psychipatic, world domination kind of way.

The rest of the technical aspects are what you expect from a Manga release nowadays. The video quality is the usual DVD standard and unlike those damn Naruto DVDs, selecting the subtitles and language is quite painless. The extras are smaller in size this time around, but they are entertaining enough to listen to or watch at least once.

Overall, it's more of the same with an extra dose of blood and that is pretty much what the people want. The series had a bit of a slow start, but it is finally finding its legs with a build up that could see the next volume being the best of the series. The faithful could be richly rewarded in the next outing.

Nothing mind blowing, but the audio commetary is at least worth a listen to.

8
Things are finally starting to pick up
LATEST REVIEWS