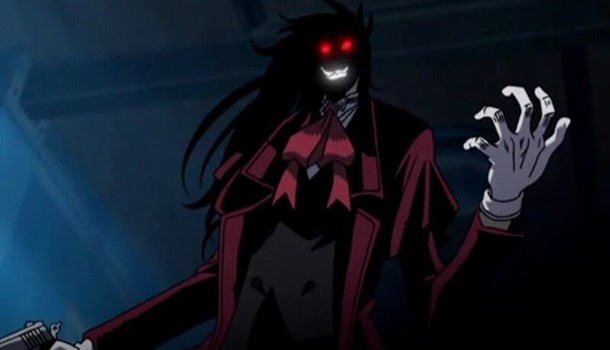 After the blood-soaked conclusion of the second volume, Hellsing Ultimate is back to give horror fans more of what they presumably want. But surely fans are looking for something a little more than gallons and gallons of blood?

The conclusion of volume 2’s battle has left the Hellsing organisation completely devastated. So now it’s time to find some outside help and go hunting for the attackers, which involves a trip to South America. Let the slaughter begin.

So let’s get it out of the way. Yes the violence is as thick and bloody as it was in the last volume. Hell I’m even willing to go as far as saying it may be even worse than it was before. Hear that knocking? That’s the Daily Mail smelling a new shock story. So yes the blood flows, the body parts fly and no one is safe in the slightest. What is disturbing is that the series seems to gleefully dance around while this all happens and show you every shot, exploding head and sliced body as it happens. People with weak stomachs need not apply.

While the blood at times can be vomit-inducing, it does nail home one valuable point about Alcuard. He is no hero. He seems to barely make the grade for the anti-hero for this series, though everyone else seems to border on the insane, so it is at least passable. But that’s the thing with Hellsing; it does get its underlining messages across, even if the body count has to rise for it. The underground war of the Christian factions is one aspect, while the extremes to which people will go to achieve their goals is certainly another.

Don’t get me wrong, most of the time Hellsing Ultimate is an entertaining horror anime and does provide the great looking fight scenes and strong storylines that you would expect from this kind of thing. It just has the issue of being somewhat gruesome, with this volume the most horrific to date.

Seras herself is unfortunately another issue. Volume 3 presents the weakness in her character, which is that the creators don't seem quite sure what to do with her. She does little throughout volume 3, save providing comic relief, while shifting towards the end for a more serious role as a slight moral compass and much needed back-up. While it is no bad thing, her character rarely does stand out and just becomes lost as Alcuard starts to carve up the screen. It just seems like a waste.

Fans of the last two volumes will, of course, love this. It has more of the same with the violence level kicked up to 11. Those of you who don’t enjoy horror anime or find the sight of blood or mangled bodies distasteful then you more than likely have backed far away from this one wondering if blood is actually going to start leaking out of your TV.