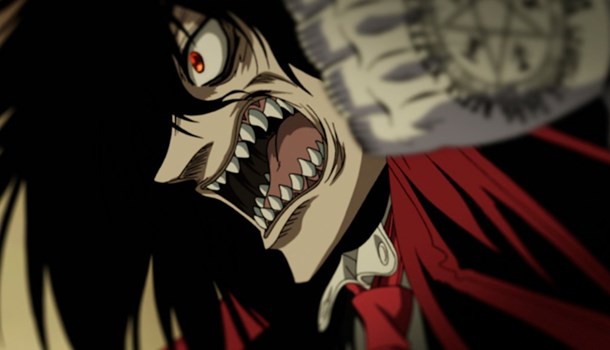 In one of the most bizarre release schedules this year, the first four Hellsing Ultimate OVAs are hitting the shelves as a Blu-Ray (and DVD) collection this month following the release of volumes five to eight. Where are the final two OVAs you ask? Well who knows when they’ll turn up; hopefully sooner rather than later. So in the meantime lets take a look back at what’s come before and see if these first four episodes truly deserve all the praise they get or if its all just hot air stemming from a release that finally promised to follow the original manga to the end.

Firstly, here’s a quick recap for those of you who might not be totally familiar with things. The titatular Hellsing organisation is a British paramilitary organisation which secretly works to eradicate vampires from Her Majesties soil. Our team consists of Integra Hellsing, the familial head of the organisation and descendant of its founders; Seras Victoria, a young woman formerly of the police but now a fledgling vampire (in a kind of Count Duckula sort of way) trying to help out the organisation; Walter, a traditional English butler who’ll happily serve tea whilst dismembering a ghoul with his other hand; then there’s Alucard, a vampire of immense power bound in service to Integra and the organisation. He also happens to know the Queen on a first name basis. Together (well, at least they’re all generally present whilst Alucard’s killing things....) they fight to protect our nation from vampires, ghouls, Catholic priests and a variety of other assorted foes.

The first thing that springs to mind rewatching these OVAs for review is "why isn’t this a live action film yet?" Given the amount of time Hollywood has spent making movies with near-identical themes and doing horrific jobs with them, you have to wonder why no-one ever seems to have looked at Hellsing as an example of what they should be doing. The story is suitably dark, the characters tend towards over-the-top and almost theatrical speeches and dialogue, and the action is fast and violent. In fact, it’s a great pleasure to see something like Hellsing just flat-out refuse to take itself seriously and make sure everything can be taken with humour - even at its darkest moments the animation can suddenly switch styles or a character presents the kind of five minute exposition/threat speech that you’d expect from a Bond villain.

Its thanks to this that almost the entirety of the episodes here just fly past, with the only hiccups coming sporadically throughout the fourth OVA where the story keeps crashing to a juddering halt to have some more exposition be somewhat awkwardly presented. Sadly, this also means that the main villain of the episode - the brilliantly named Rip Van Winkle with her magical flintlock rifle - is given less screentime for character building or indeed much of a fight scene at all once Alucard shows up to deal with her. Elsewhere things move on at a much better pace, with particular highlights including the introduction to Alucard and Seras in a sequence set in Cheddar and the somewhat infamous siege of the Hellsing organisation that takes up the majority of the second batch of episodes.

Animation wise things aren’t quite up to scratch as the quality constantly shifts around, going from amazingly high quality and fluid sequences to moments that look like fairly average Flash animation. There are moments when this shift in quality is clearly intentional, such as when everything suddenly shifts to an alternate style of animation (normally when Seras is involved), but sadly this is not the case for the most part. These episodes also have some fairly inconsistent utilisation of CG sequences which again vary from amazing to... well, not so amazing, frankly. Taken as a whole the series does look pretty good but there are enough such moments that they are very noticeable.

On the traditional dub versus subtitle argument, Hellsing does really well on both fronts - both English and Japanese casts pull out all the stops here, making it largely a matter of personal preference as to which you choose. Personally the Japanese cast was the one I tended to reach for as they gave a much more dramatic performance (plus the American impersonations of British accents – or rather, that one accent they think we all have – tended to grate after a while). The one issue with watching the sub though (and one which drove me potty) is the persistent misspelling of Alucard’s name every time it appears. I double checked in the dub, the original manga and various online sources after watching and I can’t find anywhere that suggests that Kohta Hirano ever intended the character to be called "Arucard". When you think about what his name means and implies the spelling mistake doesn’t make any sense and seems to be a case of someone not having a script with the name written phonetically from the Japanese dub.

All in all, despite the quibbles I have with it Hellsing is fun and whether you’re looking to pick up this collection to start watching the series or just to get a full set on Blu-Ray you likely won’t be disappointed. It’s not particularly original for the most part, but it knows exactly what it wants to be – a dark, black-humored literal adaptation of its source material. It does all of these things with a flair and style that’ll leave you happy to go back for more.

English and Japanese DTS-HD Master Audio 5.1 with English subtitles.  Extras consist of trailers, one clean ending and a karaoke speech from within the series.

8
Solidly entertaining all around.