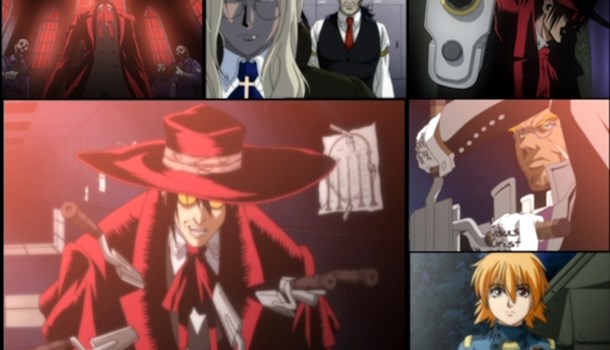 Although we've been talking about Hellsing Ultimate a lot here at UK Anime over the past few months, it shouldn't be forgotten that this epic OVA series was actually preceded by an initial crack at taking on Kouta Hirano's manga, and the early 2000s saw Gonzo try their hand at bringing the series to an audience of anime fans in TV form.

At its core, anyone who is familiar with the franchise no matter its form will recognise the heart of the series, revolving as it does around the secretive Hellsing organisation as it seeks to protect Queen and country (yes, the show is set in good old Blighty) from whatever supernatural threats might face it. The real powerhouse of the organisation is, ironically, a supernatural being himself, as Hellsing's commander and the current heir of the family's mission Integral Wingates Hellsing has within her remit the ability to call upon Arucard (the show's subtitled spelling, not ours), a fearsome and immortal vampire. Early in the series, Arucard happens upon an understudy of his own, as a so-called "ghoul" attack upon the town of Cheddar sees him save a young policewoman named Seras Victoria... although when I say "save her", she doesn't have her life saved but rather her afterlife is extended as she too becomes a vampire.

It's really Seras' experience that becomes the focal point for much of the series - sure, Arucard pops up relatively frequently to remind everyone that he's an immortal badass, and it's usually his intervention that forms the climax of any given story arc (which invariably ends with a bad guy of some description being turned to mush), but Victoria is the emotional driver of the series as she comes to terms with her undead status (how do you even select that on Facebook? I suppose "It's complicated" might suffice...), the near-constant loss of those around her and exactly where she fits into society as a denizen of the night.

Although the first half of the series hits many of the same story beats as Hellsing Ultimate, come its second half there's a clear divergence between that offering (and the original manga) and this TV outing - given the sheer scope of what is eventually asked of Hellsing Ultimate this is understandable, but with the knowledge of where that series goes it's hard not to look at this take on Hellsing with the realisation that it's lightweight in comparison. There's nothing particularly bad about the story which this TV series takes on, and it's reasonably satisfying in its own right, but without many of the strong characters and motivations which make up the source material and Hellsing Ultimate, what you're left with is a forgettable trifle that struggles to make any impact.

Where Hellsing in this form really struggles is visually - in short it looks terrible, and this is not a series that has aged well. With an animation budget of 500 Yen and three rice balls, the production staff try their best with some nice flourishes here and there, but it doesn't hide the fact that this is a low-budget affair from a time before digital techniques were as effective as they are now. As a result, the whole thing creaks along to the point where you worry that the entire thing is going to stop and be replaced by a sign that says "Sorry, we give up" at any moment.

If you can cope with your eyes being assailed with all that cheap and sloppy animation, then luckily your ears will be better served - provided you stick with the Japanese audio option that is. If you've seen any of Hellsing Ultimate, you'll find the mainstays of the Japanese cast take up the same roles here and do just as good a job of inhabiting their characters and adding some power and gravitas to the story. Set against this, the English dub of the series comes from the other end of the spectrum by succeeding in being unintentionally hilarious throughout. On account of its British setting, the entire cast struggle manfully with amusingly overblown English accents and attempts to pepper the scripts with authentic English dialogue - I had to stop watching the English dub simply because the tears of laughter were obscuring my view of the screen, and never before have I heard the phrase "Bloody Hell" (amongst others) used in such a perfectly ridiculous way. If you love inadvertent comedy, Hellsing is a ten out of ten experience when watched with its English dub.

One area where Hellsing does manage to capture the British spirit is in its soundtrack, a glorious affair which acts as a love letter to British rock and pop through the ages as riffs on everything from T.Rex to The Stone Roses. It's a perfect accompaniment to the series and is a top-notch soundtrack in its own right that deserves to be attached to something better.

In a world without Hellsing Ultimate, we might have been able to say "sure, Hellsing is okay despite its flaws, so if you like supernatural action shows then give it a try". However, we don't live in a vacuum, and this release is occurring in a world where Hellsing Ultimate does not only exist, but is a terrific and faithful adaptation of the source material that succeeds in everything is attempts to do. As a result, this offering is rendered obsolete, and unless you're a real hardcore Hellsing fan or completest then there's no reason to consider picking this up - save the money and put it towards buying Hellsing Ultimate instead, you won't miss anything of note here.

4
An average show with some positives when taken in isolation, but once you acknowledge the existence of Hellsing Ultimate there's simply no need to watch this inferior take on the series.
LATEST REVIEWS