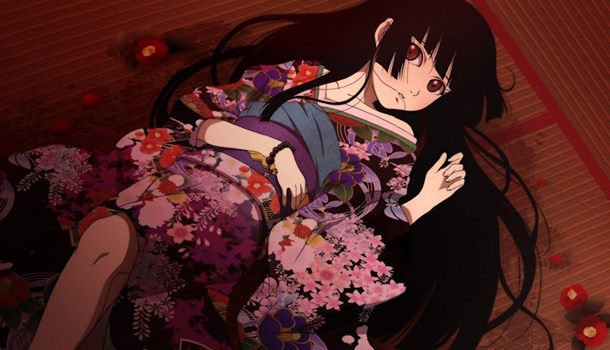 It’s raining, its cold, and I have a headache. So, sounds like a perfect time to watch the fantastically depressing second volume of Hell Girl. Nothing makes my life seem perfectly rosy than the suffering of others. Morbid I know, but we all have our own ways of coping, which is why these types of show exist in the first place.

Adulteration mixed in with blackmail and false accusations with a side order of personal abuse; a daughter’s hatred of the mother who only tries to do the best for her; the investigations of a journalist investigating the Hell Girl; a young girl seeking revenge against her friend’s ex-boyfriend over an attempted murder and; two sisters exacting revenge on a perverse patissier. Quite a peculiar variety of stories and situations the likes of which you rarely see outside of absurd shows like Eastenders.

As with the first volume, Hell Girl continues to graphically detail some of the worst sides of the human psyche and considering the series consists so far of single episode short stories with an almost different cast each time, I am amazed at the depth of the characters and how different each of the episodes have been so far, not to mention how utterly twisted some of these characters are. Using the second episode as an example, the initial reaction is that “yeah, simple old child abuse” when in fact its a complicated entanglement of the daughter’s own ambitions to upstage her mother and get back at her mother for pushing her towards success. It’s twisted yet oddly compelling.

I doubt I am the first to suggest that so far, the format of the show is a little bit repetitive, but it works albeit in an oddly morbid way.

All this aside, Hell Girl remains as weird and as creepy as ever with the whole “little girl sending people to hell” and the whole “THE EYES!!!” thing to be a little overpowering at times - not that I am a pansy or anything, but it is rather weird. Especially with the little girl in the third episode on this volume whose eyes suddenly go all big and funky after she sees Hell Girl. I do believe that we all need a bit of weirdness in our lives, and this is todays. I really do wonder if such a website exists... time to find out!