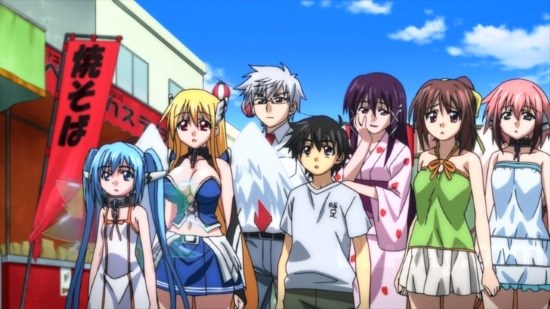 Stop me if you've heard this one before: A beautiful teenage-looking girl, who possesses magical abilities, falls into the lap of an ordinary Japanese teenage boy and almost instantly forms a master/slave relationship with the boy. This leads to all sorts of semi-sexy hi-jinks with the boys mostly female social circle, including his childhood friend who secretly loves him despite his enormous flaws and lack of anything approaching a personality. Well if that brief outline did sound familiar and you haven’t flicked off this review then Heavens Lost Property could be for you, then again, with the ever changing landscape of anime has this lost property shown up a little late?

Tomoki Sakurai is our nominal lead, he is also a huge pervert, a shamelessly huge pervert to the point when our subservient, emotionless lead female Ikaros falls to earth one of the first things he does is abuse her power to allow him to freely perv on women. (What a delightful sounding chap.... - Ed)  From their things get more complicated as more of Ikaros kind (Angeloids) arrive on earth, including the initially antagonistic Nymph, despite this there is not much of an actual plot here with one only appearing in the final episode to allow some conflict and action to occur. What we get is a bunch of stand alone stories full of naughty humour and cookie cutter characters with very little to distinguish it from the glut of similar shows. As is the norm with such stories they are very hit and miss, leaning more towards the miss column for the majority of the run. The humour in particular can fall very wide of the mark leaving long stretches of screen time totally laugh free.

Of course one glance at the blu ray cover art will tell you that comedy is not the only thing on this show's mind. We have a bevy of busty beauties populating the cast all of whom are fond of our lead to differing degrees and as expected fond of tight clothing and panty flashes. Fans of ecchi will find some enjoyment here but do not go into this expecting the same levels of nudity and naughtiness more recent shows are full of. This series dates from 2009 and is in line with the shows of that era, leaning more to teasing and implications than the post Queen's Blade world of full frontal nudity and boundary pushing we see nowadays.

Outside of Tomoki the rest of the cast also leave a lot to be desired, proving to be a thoroughly un-likeable and unmemorable bunch. As mentioned above Ikaros doesn’t really have a personality and spends the whole run time totally clueless about the human world only doing our creepy lead's bidding. The other prominent female – Sohara is, and I'm being generous here, a complete b***h, and why exactly she and Tomoki are friends still is just unexplainable as their relationship is deeply disturbing on many levels (Guys! It's okay to letch and perv on women if you're really, really nice otherwise! Girls! Its okay to beat the ever holy shit out of your male friends for real and imagined slights no matter how big or small!) Both of them are thoroughly unpleasant people no matter what the script tries to say. The only other cast members worth mentioning are Eishiro Sugata the leader of the New World Discovery Club at school who opening monologues are possibly the best thing about the show and Mikako Satsuikitane the student body president who raises some chuckles with her sassy personality and Yakuza family ties.

The animation is exactly what you would expect for this era with it looking like a lot of other shows of the time and Studio AIC not really doing anything to distinguish it from the pack. That said the series looks good on Blu-ray and the few action scenes are well handled. Obviously there is a lot of attention lavished on the female casts designed and although there is a fair amount of flesh on show the series still self censors which is kind of like an action series constantly showing the build up to all the hero's fights but not the fights themselves – frustrating.

Fans of the genre may get more out of this but this series left me cold overall, feeling dated and half completed most of the time never delivering on the ecchi or story elements a lot of newer shows of the type at least try to pull off.

4
More miss than hit, for fans of ecchi only.
LATEST REVIEWS