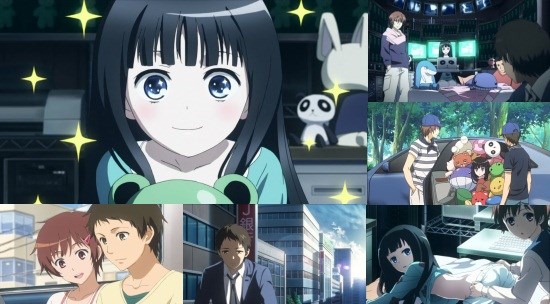 Many anime have covered that mysterious phenomenon known as the NEET (which stands for Not in Education, Employment or Training, incidentally). The bizarre reclusive characters stereotypically portrayed as such individuals tend to be made sport of and played for laughs as incompetent cowards, but now an anime has come along to change that viewpoint. The NEET of Heaven's Memo Pad are definitely a group of oddballs, but they really break the mould on every other level from what we’ve generally seen before. So, look out crime because Alice, the NEET detective, is on your case!

Before any of this, however, we have to join up with our protagonist Narumi, whose day starts out like any other. He gets up, goes to school, gets coerced into joining the gardening club by a pretty girl and then on his way home another pretty girl jumps half-naked out of a second floor window right in front of him. Although somewhat disturbed by this turn of events Narumi isn’t exactly rushing around trying to find out what’s happened, but luckily for him (or perhaps not...) his new gardening club senior drags him off to the ramen and ice cream bar (don’t ask) where she works. From here, he finds himself swept up in the case as he meets two more women who quickly have him doing anything they need (there seems to be a pattern here...), in the form of the shop’s owner Min and our heroine, the diminutive NEET detective Alice. As Narumi starts a new life spent working for Alice and her motley crew of talented NEET, he may have found a place in the world that will stop him from heading down the slope towards becoming one of them himself.

This is a series that really thrives on plot and character beats as there’s minimal action here, so it’s good that the series does well on both counts. The five stories told across these twelve episodes are well written as Narumi is plunged into everything from gang warfare to drug rings to anime's new version of the compulsory hot springs episode – the baseball episode. All bar two of these stories are told over multiple episodes (and one of the others, the first episode, is fifty minutes long), which allows the creators to really get their teeth into the characters and settings.

Admittedly there is a slight problem in that most of this time is spent on things related to the current plot arc, so most of the supporting cast aren’t allowed much time for character development, but the characters that are developed work really well. Alice is everything you want from a temperamental loli detective, and her interactions with Narumi are one of the show’s highlights. Indeed, Narumi himself is brilliantly written and never crosses the line into becoming annoying, and though he tends to save the day it never feels that this was due to his being the lead character but rather as a result of the work he’s putting into a case. The gang leader known as ‘The Fourth’ is also notable here, working in what’s largely quite a dark role but also managing to function as a positive role model for Narumi in a lot of cases. He also has one of the most amusing character beats after it’s revealed that he’s an expert with a needle and thread and is the only one Alice will trust to repair her stuffed animal collection. Other characters like military otaku the Major and Ayaka, Narumi’s friend and clubmate get less attention than perhaps they deserve but nonetheless are fun to watch. Admittedly the stories themselves do suffer a little from being a little too predictable and light-hearted for the most part, although this is corrected by the final arc which takes a very dark and unexpected turn which quickly drags your attention back in short order if you had started to drift away.

Visually the show looks great, with a set of brilliant character designs and some great animated touches throughout the series. The opening animation in particular deserves to be highlighted for a great sequence where musical notes are timed with presses of individual keys on a keyboard – it may not sound like much but it really does look great and Kawaru Mirai, the song that accompanies it is pretty great too! The series is the first that director Katsushi Sakurabi has taken the helm at in its entirety, but the upon seeing that he was also the animation director on the Revolutionary Girl Utena movie as well as working on a host of shows that have all had great animation it’s easy to see how the series came to look so good.

So far everything I’ve said makes this looks like a really strong contender (there’s also the great cast – did I mention them? No dub I’m afraid guys but you won’t miss it!), but there is one niggling little problem with Heaven's Memo Pad - one little, teeny thing that’s keeping this from the top rating I want to give it, and it comes down to originality. You see, whilst the execution of everything is really well done it’s all been done before and done better. You want a diminutive detective – go watch Gosick. Detectives who stay isolated with computers and phones? Go read Remote or even watch The Bone Collector. This extends to the plots too. Whilst everything is solid it’s all lacking that spark, that little thing that would really allow the series to hit a home run. Part of this is found in the truly excellent final arc but it takes eight other episodes to get there. Upon researching the series for this review I found that this final arc is actually based on the first of the light novels the series is based on. Whilst there are some significant character reasons why they switched the order (a decision I think works to the final arc's advantage – it would lose a lot of impact if it came first), I also wonder if it was done to make sure that the rest of the series couldn’t fail to live up to what it achieves...

Does this little niggle spoil the series? The answer to that is a definitive no. You will enjoy this series; it’s a really well put together show which whilst it is unoriginal, does everything it does set out to achieve really well and has some genius touches in the way it works. I would certainly recommend watching the series, especially if you want a change of pace from the typical fare that tends to make it over to our shores.

English and Japanese stereo audio with English subtitles are all we have to say about this extra-free release.