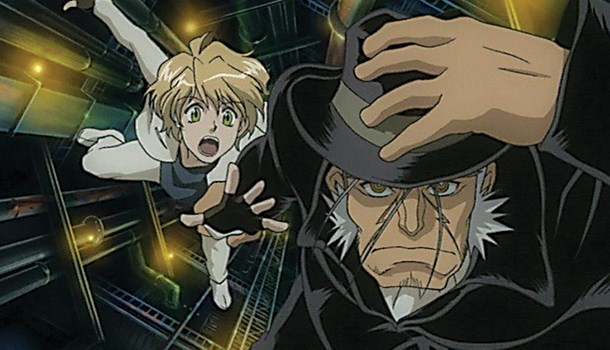 I knew nothing about this show when I originally saw it. In fact, I only picked it up because I saw it for £18 online and thought, “THAT’s the kind of offer I like!” It’s rare for me to buy an anime show that I’ve heard nothing about but I was in a kind of impulsive mood at the time. What can you do?

So… was Heat Guy J worth the effort? Well… Yes and no!

Volume 3 covers episodes 18 to 26 and concludes the story of Daisuke and J’s investigations into the crime underworld of Judoh. My first problem with Heat Guy J lies in the fact that by the eighteenth episode of a series, I expect to be suitably hooked and Heat Guy just hasn’t had that effect on me going into volume 3.

There are a fair amount of stand-alone episodes here, covering some of the history between Daisuke and his brother as well as a nice episode dedicated to Boma’s past. These are all good things but when the meat of the story does eventually kick in, the revelations seem to come all too quickly and the suspense is kind of trampled. In Boma’s episode for example; his entire story is given to us in a single episode and you go from knowing almost nothing about him to knowing everything by the end. For a character who stands out as one of the most enigmatic of the series, this kind of service just doesn’t do him justice.

By episode 22, the main story arc kicks up several gears as the identity of the real underworld mastermind begins to emerge. But again, it all feels a bit rushed as the suspense is over within the course of an episode. I find myself wanting to scream at the writers to slow down and span their ideas over a few episodes but it just never happens. It’s frustrating because the characters and the story are actually pretty good, but it’s just not told very well. The ending isn’t all I’d hoped for either, although it’s not a complete loss. I don’t want to give too much away but for a city populace that’s been on the receiving end of some really nasty underworld plotting and manoeuvring, they’re a pretty forgiving bunch!

Animation wise, your typical action junky will be well served here. There’s a lot of it to like and it’s very well done. It’s clean, well choreographed and the music is excellent to boot.

Seb kind of nailed this series with his review of volume 1. Heat Guy J misses the mark a little but only just. Depending on your mood at the time, you’ll either be able to overlook the problems with the story telling or not. You can also read Ross’ review of volume 2 here for the full picture.

Good or bad, if there’s one thing that Heat Guy J is its value for money! 26 episodes are packed onto 3 volumes and it doesn’t take a complicated Google search to find this series for eighteen shiny coins. As Ross said, you could certainly do a lot worse than Heat Guy J.

None, but for the episodes that are crammed onto the volume, I’d call you a greedy bugger for expecting any at all!

7
The potential of a good story and likeable characters are squandered by a rushed approach. The action does a lot to pull things back but it’s not quite enough.
LATEST REVIEWS