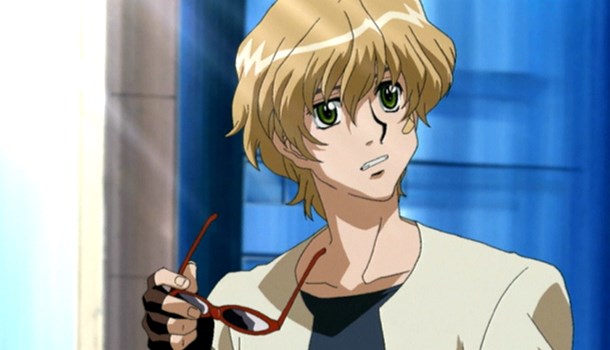 This was something of a surprise.

I had expected Heat Guy J to be a low grade series. I wasn’t overly enamoured with the design of J himself, looking gruff and decidedly unattractive, glaring at me from the promo material.

However, Daisuke’s investigations had more heart than I predicted, and I was quickly engaged in the huge number of episodes crammed onto the 2 disc set (comprising eps 9-17!!!). The episodes were entertaining, intelligent and lively, with some excellent set pieces to keep you interested.

The series benefits from some fine direction by Kazuki Akane, whose action sequences are always tight and well choreographed. The sharp characters by Escaflowne designer Nobuteru Yuki (which look almost too close to his fantasy opus at times) are attractive and served well by the bright colours and vibrant backgrounds, which mix to give the series a very pleasing aesthetic.

Similarly, the varied and vibrant cast grew on me quickly. From the gossipy assistant Kyoko to hardened veteran Inspector Edmundo, the series always has an interesting supporting character to keep your attention. Even J himself grew on me, with his stern but affable philosophising.

There are a number of stand alone episodes on these discs, ranging from subjects as diverse as identity theft, terrorist bomb threats and hypnotised killers, but by the fourth episode we’re into arc territory, and some major players begin to appear. I’ve seen enough to want to see more, so as far as hooks go, J has his into me.

Extras are non-existent, but with 9 whole episodes for your money, you can’t complain.

In summary, Heat Guy J makes an entertaining and lively addition to Manga’s catalogue, and if you like cyberpunk anime with a brain and a little heart, you could do much worse than check this out.
8
Fast, fun and entertaining in equal measure, J has much to offer the action fan.