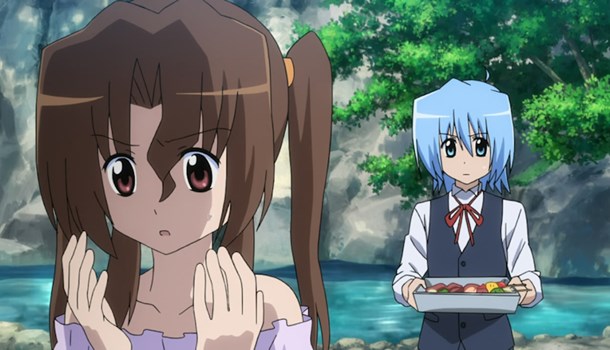 Hayate is a bit of a odd one for me; I grabbed the first two volumes of manga after reading the first chapter in Viz's sample book from the last London Expo back in October and it was an oddball bit of writing that clearly didn't take itself too seriously. I was interested and proceeded to enjoy the manga for what it was. Fluff. Not bad fluffy, but was lacking substance, resulting in a light read when the time comes. With that, can we actually expect any more from the anime in terms of substance?

The second season of Hayate no Gotoku (Hayate The Combat Butler for us in the west) is here and continues the "story" from the pervious season, where Hayate the poor, luckless soul remains the butler of Nagi, trying to repay his debt to her. So begins the adventures again as Hayate tries to survive his job and make good on his promise.

As with the manga, the anime is basically light on substance. We have characters who all fit into the stereotypes of this type of anime - A guy surrounded by girls, most of whom seem to take an instant shine to him, and then the wacky adventures to come from it. You might as well strike off character development and arching plots from the get go, as there is nothing like that at all here. Characters appear, create some trouble and leave. A situation appears, causes some more trouble, is sorted and everything resets itself. Every episode is very much self-contained and will only at times link in with the next before quickly spiraling into its new plot.

Now everything I've just said could be seen as a negative, but to be fair, it's not. Yes the series is fluff, but if you’re looking for something a little less cerebral and more just wacky stuff happening, then you’ve come to the right place. Even the characters themselves break the fourth wall on occasion to poke fun at it's own stereotypes or lack of imagination, it's that kind of show.

While we are into the second season, apart from learning about some characters it's very easy to pick up with very minimal backstory required. It's simple to dive straight in and have some fun. But in saying that, this kind of anime will only appeal to a limited audience - For those that love their slapstick, harmless fun, then this will be right up your alley. If you're looking for something deeper, then you'd best look elsewhere, because you aren't going to get it here.

It's all pretty harmless fun and most will enjoy it, just be sure not to take it too seriously or you’ll be missing the point completely.

At the time of writing, Hayate no Gotoku!! can be viewed in streaming format from Crunchyroll - New episodes are made available to premium members within hours of their Japanese release, and become available to all users one week after their original broadcast.

6
It is complete fluff, but switch off your brain and you’ll enjoy it much more.
LATEST REVIEWS
Girls' Last Tour