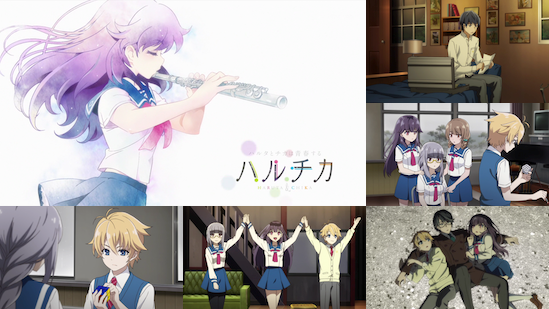 We all have phases in our lives that we’d rather forget, and starting a new school can be the perfect opportunity to reinvent yourself and start afresh. This is exactly the case for Chika Homura, who wants to rid herself of her volleyball playing tomboy persona. She’s got herself a flute and now plans to join the school’s brass club. She even manages to fall for the club’s advisor and music teacher Shinjirō Kusakabe. What she didn’t expect though was to find herself reunited with her childhood friend Haruta Kamijō, a boy who knows all about the past that Chika is so desperate to hide. An even bigger surprise is that Haruta also has feelings for Mr Kusakabe, and is determined not to be defeated in love. As the club slowly gathers more members, the two friends find themselves head to head as they begin to reconnect.

While that brief synopsis provides the general synopsis of Haruchika, you may be surprised to find how little most of that actually has anything to do with the show’s opening episodes. Instead each episode sees them tackling some sort of mystery - sometimes directly tied to them and sometimes one that they just sort of stumble upon. They aren’t so much the Scooby-Doo type of mystery (although that would make for one hell of an episode) but more everyday kind of mysteries that come with their fair share of emotional baggage. Some of the set ups come across as a bit extravagant and likewise the resolutions sometimes feel convoluted, but all without fail provide the necessary emotional gut punch to overlook it. Haruchika excels in its character drama, managing to set up and resolve interesting dynamics in a singular episodic format.

The big shame is that this great characterisation doesn’t particularly extend to the regular cast, who (with the exception of Haruta and on occasion Chika) simply feel like cogs in a machine rather than the drive of the story. The same goes for the brass band element of the story, which generally feels like simply a reason to tie characters in one place rather than something deserving of proper attention. The club’s initial dilemma of not having enough members barely even registers before the problem is conveniently hand-waved away by the arrival of nameless new members, which is nice in that it does away with a cliche slice of life trope swiftly but at the same time renders the band as even more of a background setting. These episodes also foreshadow a bigger mystery that will likely run through the course of the series - why exactly Mr Kuskabe threw away his dream of becoming a concert class conductor to teach schoolchildren. But there’s absolutely no depth to this mystery or Kusakabe as a character so far - the audience is simply told the context for the mystery while the character himself has been little more than object of Haruta and Chika’s affections.

It’s quite baffling as to why Haruchika doesn’t actively try to push its characters further, especially given how wonderfully diverse the cast is. Chika's initial surprise at the fact aside, Haruta’s affections towards his teacher are treated both casually and respectfully, with that side of the character never becoming the butt of any jokes. Elsewhere Maren - the band’s saxophonist introduced in the third episode, is of Chinese descent and was adopted by Americans now living in Japan. But while his background is the central part of his “mystery”, the race element is surprisingly understated. Even Chika’s voice actress is of Australian descent. The understated way in which Haruchika plays up its diversity is truly refreshing, which makes it all the more disappointing that the characters have little to offer outside of that.

However, the refreshing approach to Haruta’s sexuality doesn’t deter from the fact that he is otherwise a thoroughly unlikeable character. His comical moments of rivalry with Chika are fleeting, with the show seemingly more preoccupied in pushing him as some mystery solving genius who inexplicably seems to know information about others’ lives that he shouldn’t know. This is exactly the case with episode three, where his deductions based around Maren’s upbringing and biological parents could only be known had Haruta had full access to Maren’s private property – which is something the episode certainly didn’t imply. Similarly he is far too heavy-handed in his methods to get his own way, putting Narushima through an incredibly harrowing display of overdramatic theatrics as he reveals the mystery behind the puzzle her deceased brother left behind. The rest of the cast are almost all willing to go along with it too, with even their teacher not stepping into the kind of situation that would leave a visibly grieving girl even more traumatised until she gets up and gives him the slap he deserves. It’s uncomfortable to watch, and even more uncomfortable that the writers are using such scenes to simply highlight his intellect and not point out how much of a jerk he can be.

The animation is disappointingly subpar as well. With the likes of Angel Beats, Shirobako and the Professor Layton video game cutscenes (and movie) on their resume, P.A. Works are a studio with a fairly solid track record, but for whatever reason it feels like they simply aren’t bringing their best here. The intergalactic supernova that’s clearly gone on in Chika’s eyes might try to lull you into a false sense of beauty, but behind those vivid irides lies a series with flat animation often propped up by weak CGI. The first episode’s “flash forward” uses this to an almost painful degree for an auditorium crowd, creating the kind of reaction that isn’t preferable for a show’s opening shot. Thankfully things do pick up a little bit from there, but moments like episode four’s shower of coins are enough to remind you that this show’s merits certainly don’t lie in the visuals.

Haruchika is quite the oddball series. Its episodic mysteries are both heartfelt and engaging, but the cast aren’t interesting or likeable enough to sell the show’s ongoing narrative. The brass band and bigger mystery behind Kusakabe seem like more of an afterthought than the show’s grounding, while the side characters are pushed into very basic supporting roles once their introductory episode has passed. Based on those negatives alone, how Haruchika manages to be as watchable as it is is a mystery in itself, but somehow it’s managed it.

You can currently watch Haruchika - Haruta & Chika in streaming form on Animax UK and DAISUKI.

6
A mystery where episodic plots far outclass the main cast.