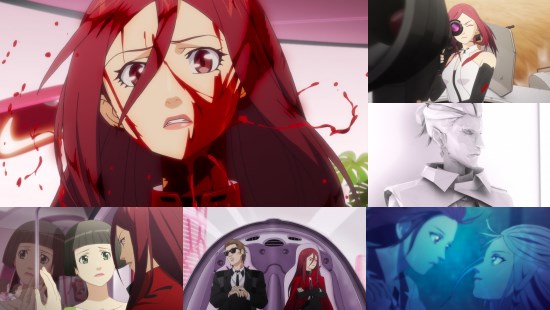 Last October, I sat down in a Glasgow cinema buzzing with excitement as part of the crown for the UK premiere of Empire of Corpses, the first of three theatrical anime adaptations based on the words of the sadly deceased science fiction writer Project Itoh. For the first half hour or so, that enthusiasm didn't dim - there were some fascinating topics and idea at hand, wrapped in a unique aesthetic that did it justice. Sadly, it was all downhill once the curtain fell on the film's first act, and the result was frustrating in the extreme - not a good start to this much-vaunted trilogy.

Now attentions turn to Harmony, a film which seems to have more going for it from the outset - word on the street was that it has superior source material at its disposal, no doubt helped by the fact that Itoh himself died just thirty pages into writing of Empire of Corpses, whereas this time the novel is all his own work. With Studio 4°C at the helm and the promise of a futuristic dystopia compared to the Victorian steampunk of the first film, my hopes were again high. "Once bitten, twice shy" wasn't even a statement I thought of countenancing, but as it turns out it's an old adage that perhaps I should have paid more heed to.

Much like Empire of Corpses, Harmony sets out a fascinating world in short order. This is a dystopian future which takes a very prevalent modern concern - ensuring the health of the populace - and turns it into a technology-driven and almost cult-like state of affairs, known to many as "lifeism". Such is the push for each and every human to live a long and healthy life, individuals are implanted with chips - called WatchMe - which are activated upon reaching adulthood to monitor everything its owner does with a view towards optimising their health. Eat too quickly? WatchMe's augmented reality display will remind you to chew your food well. Skip a meal? WatchMe reminds you of the importance of eating regular meals. For most, this is a thing of joy and wonder - who cares about a nanny state when that nanny is helping you to live far, far longer than you otherwise would?

However, this isn't a view shared by Tuan Kirie. Although she works for the UN's World Health Organisation - who have basically become the World Police on a planet where healthcare is the kind of thing you'd go to war over - her job engaging with those fighting against the spread of WatchMe and the government that oversees it is really just her escape route from the stifling and overbearing control of her homeland. Unfortunately, that escape is soon cut short - her life of boozing and good times free from WatchMe's oversight is ended when a superior ships her back to Japan.

It isn't just escaping the constant monitoring that has kept Tuan away from home - it's also a terrible reminder of her teenage years; of a friendship between herself, the anarchic Miach Mihie and another friend Cian; of how that friendship ended in a suicide pact which saw Tuan and Cian live while Miach died.

Her friend's death comes into sharp focus as Tuan's return to Japan coincides with a horrific incident - a simultaneous mass suicide involving thousands of people across the globe as they end their lives in a wide variety of disturbing manners. It's clear that these people didn't all choose to kill themselves at the exact same moment, which leads to only one conclusion - someone is using the WatchMe system to broadcast a stark message to world's populace. It's a concept that is eerily familiar to Tuan, as it's an idea that Miach claimed to be able to enact on a whim prior to her demise...

In terms of both world-building and concept, there's plenty for the viewer to get their teeth into within Harmony. We already live in a world where smartphones, watches and other devices are bringing about the "gamification" of health; the buzz-phrase "wearable computing" simply won't go away in a similar regard; governments are discussing taxing sugar and unhealthy foods to force people to make the choices which are best for their well-being. It seems like a natural leap to imagine government taking control of those monitoring devices to prod, or even force, people to live healthily above all else, and it's certainly the kind of surveillance society that it would be easy for the populace to sleepwalk into the midst of.

This is where the comparisons to Empire of Corpses begins however - much like that film created a world ripe with promise to create fascinating conversations around life, death and what that death means for those you leave behind, it frittered them away for what was ultimately an unsatisfying zombie romp of sorts. Similarly, Harmony brings all of these conversations about personal health, how your health is the business of society as a whole and what that means to the table... then sweeps it off said table to go focus on other things, namely Tuan's search for closure regarding her friend.

This isn't necessarily a bad narrative choice so much as it is a wasteful one, and in fairness its story is a more coherent one than Empire of Corpses - there is a certain resonance to Tuan's tale and her desires, and they're brought to fruition in reasonably well-realised fashion. The problem is that this makes all of the material around the Tuan-Miach relationship feel incidental - this pair's teenage friendship could just as easily have been predicated around music or kittens, so the "cult of healthcare" angle doesn't have much bite to it and ultimately feels like a concept within which the author has little to say, surprisingly so considering Itoh's own health issues and ultimately his death at a tragically young age. Compare and contrast this with a series like Psycho-Pass - which tackles mental health in a similar fashion in many ways - and the disappointment really becomes profound. If you're looking for a personal story without asking any of the big questions as more than a passing (or perhaps even accidental) thought, then Harmony may well sit much better with you.

There is another aspect of Harmony that becomes tiresome as it goes on, and that's the sense of disinterested negativity that permeates the film. If this movie has a message, it seems to be broadly one of "life sucks", with no real attempt to analyse why and how. Tuan's melancholy throughout the film is clear, but beyond her obvious distaste at WatchMe and everything it stands for we never get to see or understand her thought processes as to why that melancholy has manifested in quite the way it has. There's almost a feeling of adolescent immaturity to the story as a result - Tuan dislikes or is apathetic towards most things almost as a force of habit, but is never able to elucidate why, much like a sulky teenager. This maybe isn't helped by what often feels like dispassionate performances from the Japanese voice cast, which one suspects is supposed to sound weighty but instead seems tinged with boredom much of the time.

Although Harmony can't match the sheer quality of Empire of Corpses' animation, its aesthetic is absolutely on-point - its high-tech world might as well be a human body, filled with artificial, man-made buildings that look more like body organs, and with a pink hue to all and sundry. It's a simple but effective piece of visual language that proves to be one of the film's highlights. That aside, character designs are distinctive and the show has one or two nice set pieces, while its blend of traditional animation and CG feels distinctly low on detail but serves its purpose well enough. Indeed, the use of CG even offers up the film's most shocking moments, as we're treated to first-person footage of people committing suicide, which is genuinely disturbing. For such a dialogue-heavy film, there's understandably an attempt to make things feel more dynamic and visually interesting with lots of panning camera shots and unusual angles, but to be honest these shots are so clearly just there for the sake of it that they can become frustrating.

Considering my feelings for Empire of Corpses, I was worried that using it as a frame of comparison to Harmony would be to give the latter film too easy a ride, but as it turns out even in that suspect company Harmony struggles to stand proud. Make no mistake, it's a better film than its Project Itoh predecessor - a tighter narrative sees to that - and perhaps it's harsh to demand something thought-provoking of its story above all else, but to my mind why would a film with the themes it sets up not dig into them more deeply? Instead, what we're left with feels a little like a glimpse into the writing of a teenager's diary - a complaint that the world is a terrible place where everyone is against them, but without any substance to really make you believe it to be anything more than immature rambling.

If you're looking for thoughtful science fiction, go out and find a copy of Time or Eve or Psycho-Pass - it has more to say on similar themes and presents those thoughts more maturely in a scant few minutes than Harmony can manage in its overly verbose two hours.

4
Its core narrative just about holds up, but this overly long and overly verbose film flatters to deceive - it says so much, yet somehow ends up saying nothing.
LATEST REVIEWS