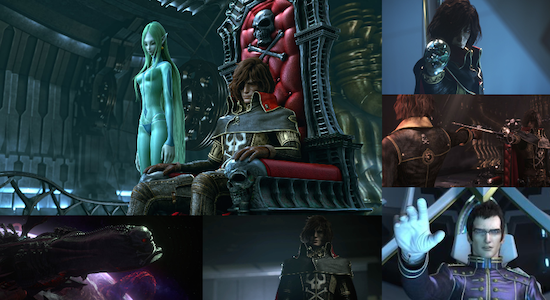 The only thing cooler than a normal pirate is a space pirate, which is probably the reason why Captain Harlock has become a bit of an anime legend over the years. Since his humble origins in the 1978 series Space Pirate Captain Harlock, the character has gone on to star in a selection of films, series and manga as well as crossing over into various others by creator Leiji Matsumoto. Then in 2013 Toei Animation breathed new life into the captain with Harlock: Space Pirate, a fully CGI film boasting a budget of approximately over 30 million US dollars - making it the studio’s most expensive venture to date.

Hundreds of years into the future, mankind has left the planet Earth to form colonies all over the galaxy. But when the universe’s resources begin to dwindle, humanity attempts to return to its home planet. Unable to house the billions of humans returning, a “Homecoming War” breaks out, taking millions of lives until an authoritarian government named the Gaia Sanction deems the Earth a sacred planet that humanity is forbidden to repopulate. However, for 100 years the Gaia Sanction has been under siege from the mysterious Captain Harlock and his dark matter-powered pirate ship, the Arcadia.

Sending covert agent Logan (Yama in the original Japanese version) to infiltrate Harlock’s crew, Gaia Fleet Admiral Ezra (Isola) hopes to bring Harlock in once and for all. What Yama uncovers though isn’t just Harlock’s end goal, but also the truth behind his supposed 100 year lifespan and the secrets the Gaia Sanction have also been keeping from humanity.

Although CGI is becoming the norm for animated films in the west, with 2D still reigning supreme in Japan it still feels like somewhat of a special occasion when one rears its head. Despite now being ten years old, 2005’s Final Fantasy VII: Advent Children still seems like the benchmark for Japanese CGI movies, though in terms of aesthetics Harlock definitely feels like a new contender for that throne. Although some of the character designs are a bit spotty (the female proportions looking especially off) and the movement can be a bit jerky at times, the visual element still definitely lives up to the title of Toei’s most expensive animated production. Moments such as the Arcadia emerging from its black shroud look eye-poppingly beautiful on Blu-ray, as do its space battles against the Gaia fleet. It wouldn’t be wrong to say that Harlock Space Pirate looks like a two hour long PlayStation 4 cutscene, and in this case that description certainly isn’t a bad thing.

Even though the film is a strict reboot, it seems quite aware of Harlock’s status as an anime legend, playing the character up as that legend more than a character. This presents one of the biggest problems with Harlock Space Pirate - no one feels like an actual character. Though Harlock is the one with his name in the title it’s Logan that’s the true focus of the story, but he (along with all the other characters central to the story) feel like they are just there to fill roles rather than be relatable people. The narrative dives head first into introducing all the characters, with their place and relationships only really becoming clear later on. Sometimes it’s through flashbacks, sometimes it’s through a sentence or two, and some characters don’t get anything at all. It’s hard to care about the plight of Harlock’s crew when in the end all they feel like are “Harlock’s crew”. That said, the apparent love triangle between Logan, Ezra and his wife Nami does play out with some rather surprising twists.

But the character problems all come to a head halfway through the film, where Harlock’s origins are revealed and things take a dive into the more fantastical realms of science fiction. This new rebooted origin for the legendary pirate certainly has a lot more depth to it than his previous, more humble origins, but fans of the original may also be put off by this very different interpretation, especially since it also leaves the viewer with the conundrum of who you’re actually supposed to be rooting for in this film. Neither side being in the right may create a far more realistic and/or believable setting, but when it comes to entertainment value the film as a whole definitely suffers because of it.

Also marring this release somewhat is Manga Entertainment’s bizarre formatting of the film, which can be extremely confusing for buyers if they don’t know what they’re getting from the outset. Full details of this can be found in our previous Through the Mailbox feature, but basically the Blu-ray disc only includes the English dub of the film while the DVD disc only includes the Japanese audio (and subtitles). As if the frustration of only being able to watch the Japanese audio version in standard definition wasn’t enough, the subtitles are based upon the ‘International’ version and thus use the altered character names. Even if you aren’t particularly in tune with Japanese, seeing “Logan” written in the subtitles but constantly hearing the character referred to as “Yama” can get rather grating. Even if the distributors hands were tied on how they had to distribute the film, it would have at least been nice to have the Japanese language disc provide a more authentic version of the film rather than have the subs rely on the version you’ve chosen not to watch.

If only a single thing should be said about Harlock: Space Pirate. it should be that it’s ambitious - not just in terms of the computer imagery and monumental budget, but it’s attempts to add to twists and a deeper level of science fiction to the rather basic captain. But while it succeeds in doing just that, it perhaps also loses a significant part of what makes Captain Harlock such a brilliant protagonist in the first place.

7
A delight for the eyes but unlikely to spawn a new era for the space pirate.