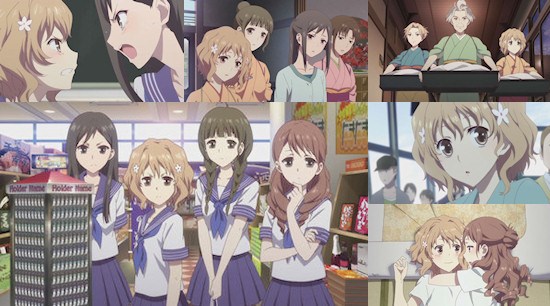 We won't lie - the first half of Hanasaku Iroha impressed us immensely with its gorgeous visuals, fun and varied characters and a pretty decent blend of drama and humour that made every episode a joy to behold.  Bringing these elements to bear over a full twenty-six episode series however is a more difficult proposition, so has this show got the energy to keep us hooked until it reaches the finishing line?

The second half of the series begins with a story arc set around the time-honoured anime tradition of the school trip - a potential warning sign for a show running out of ideas you might think, but again Hanasaku Iroha succeeds in making the most of its characters and circumstances to deliver a low-key yet utterly entertaining pair of episodes.

From here, we slowly but surely build up to what is effectively the crux of the series, with a seemingly fun story about a movie production being filmed at the Kissuiso inn setting the wheels in motion for events which eventually leads to crisis upon crisis, taking the entire establishment's staff by surprise.  All of this is mixed in with some hefty dollops of personal drama for numerous members of the show's cast, with Ohana's uncertain relationship with Ko perhaps topping the bill despite threatening to be eclipsed by other matters of the heart.

Again, all of these individual and collective tales of woe are delivered with a certain lightness of touch that allows humour to seep into proceedings at every opportunity, while the whole endeavour is helped along by the sumptuous visuals which not only deliver fabulous backdrops for the show's settings but also bring new heights in the animation of character's facial expressions in particular.  In nothing else, Hanasaku Iroha is a compelling series to watch simply because it looks so beautiful, and P.A. Works really can't be commended enough for their efforts in this field.

The one problem that does perhaps arise as a result of its decision to fill so many episodes is that some of the drama on show in the second half of the series never has the same strength or clarity of that seen earlier in the show - indeed, at times the source of aspects of its emotional turmoil is so cloudy it's difficult to really get a grasp on what is going on and why at all, which is particularly a problem when you're reaching the pivotal finale of the series.  This is negated to some degree by the continually engaging properties of the characters on show here, but if we put our hearts aside and think we're our heads it has to be said that this second half of the series doesn't quite shine as brightly as the first in overall terms.

Even with these occasional moments of "foggy" story-telling and development, Hanasaku Iroha is still a triumph in achieving what it sets out to overall - a victory best exhibited by the tear-jerking and somewhat bitter sweet episode that goes to show just how much you've invested yourself in its wide range of characters during their journey over the course of the series.  With frequent, brilliant moments of comedy and plenty of lovable characters wrapped up in its visually stunning package, there's a lot to like about this show, and like (if not love) it you almost certainly will.  Even when it's off-form, Hanasaku Iroha remains eminently watchable, and is one of 2011's most enjoyable anime outings as a result.

7
It's a little less compelling in its dramatic attempts for this second half, but Hanasaku Iroha remains a gorgeous and decidedly entertaining series to watch.
LATEST REVIEWS