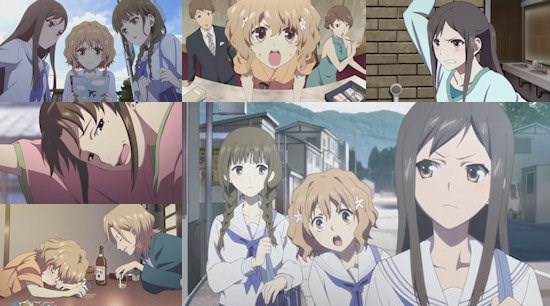 When we reviewed the first three episodes of Hanasaku Iroha back at the start of the spring anime season, we found ourselves confronted with a series that was visually stunning but difficult to pin down - what its primary aim to be a coming of age drama or a slice of life comedy?  Regardless, those early instalments proved to be equally adept at both ends of that particular scale, leaving us hungry for more of whatever it chose to serve up to us.

As the first half of the series progresses with the austere and decidedly traditional Kissuiso inn as its backdrop, Hanasaku Iroha continues to keep a foot firmly in both camps even if it sometimes blatantly leans towards the foot it has planted in its "comedy" field - although the show ramps up the drama from time to time, a laugh or two is never far away thanks to the hapless Ohana as she somehow manages to muddle through her working life with a combination of outspokenness, endearing clumsiness and the ability to make up her own phrases at the drop of the hat (including perhaps my favourite new phrase of the year "fest it up", or "bonboru" in Ohana's native parlance).

Personally, I'd probably argue that this series shows its best side when it comes to delivering outright entertainment without too much concern for melodrama - witness the visit of a group of rabid "survival gamers" to the inn and the hilarious comedy set pieces that this produces as a perfect example of what the series can do (via an episode which also manages to build head waitress Tomoe's character) without any deference to anything too serious.

Then again, Ohana's character in particular also serves as a great foil no matter what the series throws at her - her bungled romance with and feelings toward friend Koichi hangs heavy over the entire first half of the show in a way that manages to feel like an authentic teenage relationship despite our larger than life protagonist, and even the seemingly unlikely springs which blossom in Tohru's mind for Ohana actually start to feel believable after a while.  Indeed, away from its sharp eye for a one-liner or comical occurrence, perhaps the most notable aspect of Hanasaku Iroha's first half is the level of character development on show - every character gets rounded out to some degree, while Ohana's family in particular given a chance to show a softer side after the harsh treatment we see them dish out to Ohana earlier on, which the series manages to do without seeming too twee and forced.

This isn't to say that the series thus far gets everything right - the climax to the first half of the series is a bit of a let-down after the amount of build-up afforded to it, and other instalments also miss the mark slightly to deliver a couple of slightly mediocre episodes.  However, every episode is so broadly entertaining and packed with fun (or at least interesting) characters that its easy to let such stumbles go and instead focus on the bigger picture - that this remains the season's most relaxed, easy-going and enjoyable series to watch.  Add to that its never-endingly beautiful animation and lovingly reproduced scenery and you have something which borders on the unmissable.  The only question now is whether the second half of the series will choose to focus on the dramatic over the humorous or continue down its current path - either way, chances are it'll be well worth watching.

8
This series continues to blend comedy and drama with a lightness of touch and beautiful animation that makes it a joy to watch.
LATEST REVIEWS