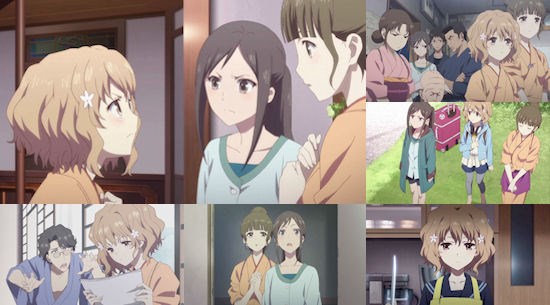 Ohana Matsumae loves drama... and it's probably a good thing too considering her errant and easily distracted mother who spends more time concerning herself with work and boyfriends to worry too much about her daughter's welfare.  It's Ohana's lone parent that gives her daughter more than enough soap opera to deal with as streaming series Hanasaku Iroha kicks off, dumping her on her grandmother as she goes on the run from her debts, while Ohana's long-standing male friend confesses that he's in love with her just as she's shipped off to the country.

While this set of circumstances would scar most teenagers for life, Ohana is very much a "glass half full" kind of girl, arriving at the bath house-cum-hotel run by her grandmother with a sense of grandiose excitement at her perception of a thrilling new life.  Any such delusions are soon swept away however upon meeting her grandmother - a Cruella de Vil type right down to her hairstyle who seems to care not a jot for her grand-daughter, instead using her as nothing more than another employee who is expected to get up early, clean and serve the guests.  With even her co-workers hardly taking a shine to our loud, outspoken protagonist, it seems as if Ohana is going to have a tough time ahead of her...

The first thing you'll probably notice when you sit down to start watching Hanasaku Iroha is that is looks beautiful - as is so often the case with their outings, animation studio P.A. Works have done a sumptuous job of creating beautiful sceneries and landscapes, and these backdrops are set against a collection of excellent character designs.

This visual beauty is only the tip of the iceberg however, as Hanasaku Iroha's opening episodes barely but a foot wrong in serving up its surprisingly potent mixture of drama and comedy.  After treating us to an increasingly dark first episode, by its third instalment we're doused in liquid comedy gold as a potentially disturbing chain of events is somehow twisted effortlessly into levity and occasional slapstick.  This mish-mash of elements has no right to work, but it does and it's incredibly effective at combining into an utterly captivating package.

At the centre of it all is, of course, Ohana Matsumae - a fantastic lead character whose human qualities shine throughout.  Ohana makes for an absolutely believable teenage protagonist - she's opinionated, idealistic and loud-mouthed, yet for all of her outspoken behaviour and her countenance of an oddball spoiled brat there's a heart of gold within that creeps to the surface more and more despite the testing times she's dealt with.  In short, she's a perfect foil for everything the series throws at the viewer, and her behaviour serves to both ramp up dramatic moments and provide some snappy one-liners as the situation demands with aplomb.

Thankfully, Ohana is also backed up with an excellent supporting cast - while the other major characters initially appear to be one-dimensional, come the end of episode three they all prove to be anything but.  Even the aforementioned evil grandmother and Ohana's "arch-enemy" and room-mate Minko display softer sides to their harsh exterior to satisfying effect as the series progresses.

The only real criticism one could level at Hanasaku Iroha is that some of the drama and situations it presents are contrived and unrealistic - but then again, can't you say that about any drama series?  Setting that minor quibble aside, the opening episodes of this series are an unqualified success in pretty much every area from its visual beauty down to its sharp yet likeable characters.

Above all else, Hanasaku Iroha is incredibly entertaining to watch, and serves an another feather in the cap of director Masahiro Ando, a man better known for directing action-centric works like Sword of the Stranger and CANAAN.  If you're still trying to decide what show to follow for this spring 2011 anime season, then this is one series you should seriously consider adding towards the top of your list.

9
A visually stunning series filled with great characters and a heady mix of comedy and drama. A must-watch thus far.
LATEST REVIEWS