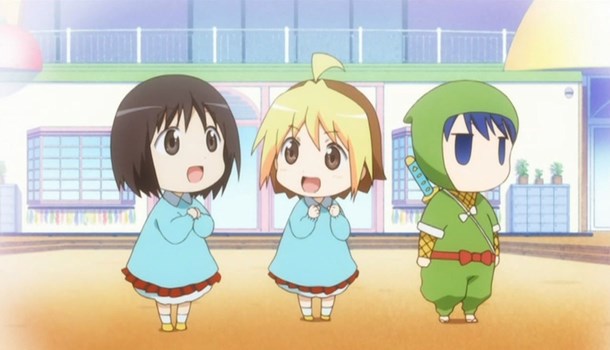 We're well used to anime series basing themselves around a school setting for their focus, but generally such a setting utilises a middle or high school for any comedy or drama it wishes to convey.  Not so with Gainax's latest offering Hanamaru Kindergarten which, as the name suggests, takes us all the way back to pre-school.  Cuteness is almost guaranteed to abound given this choice of location, but can this show deliver more than just a few "awwww" moments?

We're introduced to the kindergarten of the show's title via Naozumi Tsuchida, a young man just about to embark on the start of his pre-school teaching career.  When all is said and done, Tsuchida is a pretty average guy - He still isn't entirely sure what he wants to do with his life, but he has an eye for a pretty girl or an opportunity to put in a few hours of gaming when he gets the chance.  However, Tsuchida also finds himself in an enviable (or terrifying, depending on how you look at it) position, being as he is the only male teacher at Hanamaru.  In no time at all, he finds himself developing quite the crush on fellow teacher Nanako Yamamoto, a kind and beautiful individual who proves to be completely clueless when it comes to recognising her charms and the effect they have on others.

While the relationship between Tsuchida and Yamamoto rumbles on throughout the series, this is only part of Hanamaru Kindergarten's story, and of course much of the series centres around the kids within the kindergarten themselves.  It's from this angle that Hanamaru Kindergarten takes a rather odd, and at times even uncomfortable, turn - In short, the major plot point from the pre-school children's angle is the outgoing and energetic Anzu's falling in love at first her sight with her teacher, and spending the rest of the series vowing to marry him and the like.  While this in itself isn't too bizarre, it's the way that it's frequently expressed that doesn't feel right, with the kindergarten girls worrying about breast size and how to look sexy in a way that simply feels "wrong".  I fully understand that the entire point of such scenes are for comic value by having the children try to behave like adults (while the adults struggle to express themselves more than the children), and it's clearly attempted in a way that's supposed to be cute rather than creepy or disturbing, but it honestly didn't sit well with this reviewer - and it isn't often I can say that about anything I've seen in anime over the years.

Unfortunately, this particular plot point (and others similar to it) is the mainstay of Hanamaru Kindergarten's comedy, which detracts from the genuinely heart-warming dynamics between the main adult characters as they go about their working and personal lives that only really gets any focus towards the final few episodes of the series.  This leaves us with a series that can certainly be cute at times while showcasing numerous genuinely likeable characters (even though their personalities are often the stuff of cliché), but falls flat at delivering any laughs beyond its one-track attempts at wringing humour out of little kids acting more grown-up than they are.  It's a formula which becomes tiring almost before the first episode is out, and it makes for a disappointingly one-dimensional series which ironically pales into comparison against the variety of styles and concepts which make up the individual ending credits which the series employs after each episode.  When they closing titles are the best reason to watch a series, I think it's fair to say that it's doing something wrong, although if its particular take on comedy sounds like something you'd enjoy then your mileage may vary.

At the time of writing, Hanamaru Kindergarten can be viewed in streaming format from Crunchyroll.

5
Even if you can get beyond this show's odd take on love and relationships, there still isn't much to show in terms of comedy or fun for the viewer.
LATEST REVIEWS