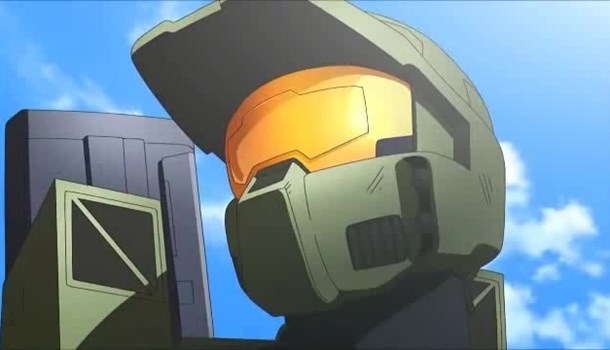 Hot on the heels of last weeks Dante’s Inferno, we have the next contestant to the multi-studio project and this time we are focusing on the vast Halo universe. Unlike the previous collection, Halo Legends features only Japanese studios with Studio  4C, Bee Train, Studio Bones, Casio Entertainment, Toei Animation and Production I.G. doing their bit.  Is this new compilation worthy of the Halo legacy or is it lost in space?

Being a collection of stories, there is no overall story arc like Dante’s Inferno; instead we get separate stories that are canon (except for one) and help add to the overall Halo universe. The most important one for fans will no doubt be “Origins”, a two-part episode created by Studio 4C. This one chronicles the events that lead up to the end of Halo 3 in a more abridged format, especially where the game storylines are very lightly touched upon. It’s more concerned with looking at the ancient race of aliens that created the Halo network called the Forerunners and their fight against The Flood and eventual activation of the network to wipe out The Flood.  This kind of back story will no doubt appeal to the legions of Halo fans out there and will be their first port of call.

That’s not to say the other stories are weaker. They do vary in quality, and “Origins” itself does actually have some weak animation in places, especially when animating the organic feel of The Flood. While humans, humanoid creatures and machines are animated fine, anything organic seems to fall flat and lowers the quality of the production.

The other stories however are animated perfectly and look like very high-end productions. A special mention has to go to Production I.G’s The Duel, a Halo take on the classic samurai films.  This episode focuses on the first Arbiter, an Elite who starts to carve a bloody path of revenge after his wife is murdered on orders from the Covenant. While the story takes a unique spin on a classic tale, it’s also the presentation of the episode that stands out. Filtered with a watercoloured effect, it makes it feel like the scenes are painted, giving much more emotion to the episode. It does have the slightly negative effect of being hard to see in darker scenes, but it has it’s own charm and makes it one of the better episodes.

The other episodes, while good in their own right, are not as quite as standout when compared to the rest of the package. “Homecoming”, “The Babysitter” and “Prototype” are quite standard war stories with “Prototype” standing out the most, mainly due to it’s relentless action. The last episode on the disc, “The Package” is actually quite an unexpected visual feast, as it is a CG affair with the large scale explosions, combat and relentless action you would expect from something based upon Halo. There are actually portions made to look exactly like the game from the players perspective - now if we could do all the acrobatics and killer death moves in-game, Halo would no doubt be even more awesome.

The one unexpected story comes from Toei Animation called “Odd One Out”. This is the only non-canon story in the collection as it is a parody of Master Chief and the Halo universe. Of course, Master Chief isn’t the source of the parody. That is left to someone who looks a lot like the Chief, but has a very different attitude. Called Spartan 1337 (geddit?), this warrior has a hugely inflated ego with bad luck in equal measure. More like a cross between an episode of Dragon Ball and Halo, the Spartan and a group of kids take on the Covenant’s latest bio-weapon as it hunts the Spartan after he strands himself on a barren planet when falling out of a Pelican dropship. It’s very comical and more in-line with the more comic elements of DB, and also has some fantastically over the top fight scenes on the same scale as the famous TV series. To have it dropped in halfway through the collection helps greatly to break up the serious tone of the disc and gives something a little different to the entire thing.

On a technical stand point, Halo Legends is in some respects a well put together disc, while in others it is incredibly lacklustre. We reviewed the film collection on Blu-Ray through a PS3 and a HDTV, ensuring that everything was razor sharp and fantastic to look at. The issues however appear when the disc first boots up, with FBI warnings and American title cards appearing on previews such as the one for the new Justice League film. It was also at this point that the disc managed to crash my PS3 and forced me to give a complete restart. While it worked the second time, it was slightly worrying, bringing conspiracies of Microsoft hacks placed within the Blu-Ray when played on a PS3. These are most likely unfounded, but you never know.

Overall, Halo Legends is a well put together collection. While it doesn’t have the constant narrative like Dante’s Inferno, it is much better in its production and animation, while the stories are much more tightly focused and do actually add to the series’ canon. The sound work is the usual high standard, taken directly from the game it is a full orchestral score and just helps to add to the entire thing. Halo fans will be the ones that get the most out of the collection, adding more in interesting and varied ways. Non-Halo fans will no doubt enjoy the stories, but it is likely that those that can’t tell their Forerunners from their Elites, Pelicans and Brutes will be confused by a lot of what’s going on.  While it is enjoyable, knowledge of the source material is really a must and those that don’t have it may  as well borrow or rent this rather than buy. For the fans however, it’s a must buy.

Both the 2 disc DVD and Blu-Ray contains additional features including audio commentary with directors Frank O'Connor (best known as Bungie's ex-community manager) and Joseph Chou, "The Making of Halo Legends," and "Halo: Gaming Evolved" which explains the Halo phenomenon.

So for whichever format you buy for, you get plenty of bang for you buck. It's a shame that a Japanese soundtrack is missing, but with the very Western feel to the series as a whole, it's not overly missed.

8
More aimed at the Halo fans, but still a great collection of stories in script and animation
LATEST REVIEWS