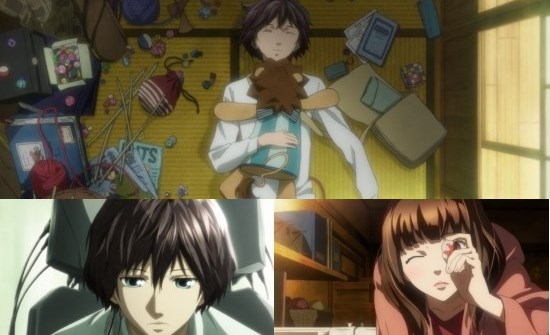 As a robot frolics in the water with a look of childlike innocence upon its fate, a passenger jet explodes and breaks up in the skies above - two seemingly unrelated events that are soon tied together as part of the opening of this short film produced by Production IG offshoot Studio WIT, currently enjoying the limelight as the studio responsible for the Attack on Titan anime adaptation.

The robot in question is Q01, and this machine has a job to do as part of an innovative programme to help the bereaved by creating robots that look exactly like their lost loved ones - a concept that seems likely to cause even more trauma to those left behind by aforementioned loved ones to me, but let's ignore that for a moment for the sake of focusing on this particular story.

So it goes that, after the plane crash which tore apart boyfriend and girlfriend Hal and Kurumi, Q01 is reformed to look like the spitting image of the dead partner in this relationship, and from here Hal is introduced to Kurumi all over again. The trouble is, Kurumi has shut herself away from the world and wants nothing to do with anybody, leaving Hal with a tough job to coax her out back into society, and perhaps more importantly back to happiness.

Luckily for him, Kurumi seems to have made a habit of writing her dreams and wishes on Rubik's Cubes, and completing these cubes affords Hals some clues as to win Kurumi's affections. This also gives Hal some lessons in how the world works as he figures out that not everything has a price and how the human heart works in a metaphorical sense, all the while growing closer and closer to Kurumi as she opens up to him and talks about Hal's past and her memories of him.

Unfortunately, it seems that there is a darker side to this man's past, involving illegal activities and a fate which saddled him with huge debts, and it's this aspect of his life which threatens to come back to haunt him and destroy the hard-earned trust and affection that has built up between Hal and Kurumi. As all of this comes to a climax, there's a twist in the tale which turns the idea of who needs to be coaxed back to the real world by whom on its head...

Taken as a whole, Hal is a curious affair - after an odd and slightly forced way to set up the core of its story, Hal's introduction to Kurumi offers some rather charming moments as we watch him trying to figure out how to cheer her up and coax her out of her shell while also tackling the difficulties of his maladjustment to society and the outside world. It's these moments which are by far the most enjoyable that the film has to offer, but this is a story with other fish to fry - fish that this short movie seems to be in a hurry to cook as it rushes through building up Hal and Kurumi's relationship in a most unsatisfying way. Thus, rather than slowly growing its romance or attraction between the two leads, this is delivered in jarring jumps - one minute Kurumi won't even let Hal see her, the next they're talking, and the next they're hugging. These moments perhaps wouldn't be so troublesome if there were a more genuine feeling of chemistry between the two characters, but their relationship feels stilted throughout and more like one convenience (either to the plot or the characters) than a natural, organic one.

All of this is in service of building up to a big pay-off designed to pull the rug out from under the viewer - while it certainly succeeds in achieving that, and perhaps making its core point about differentiating between man and intelligent machine in the process, this revelation feels more akin to being hit with a sledgehammer rather than treated to an exquisite swish of an artist's brush. Rather than allowing you to accept this twist in the tale, you're instead left questioning its integrity (which in fairness just about holds up to scrutiny), before some of the potential impact of the knowledge suddenly imparted upon us feels wasted due to the events which occur directly afterwards. Admittedly, this is perhaps another symptom of the film's short running time, but that doesn't deflect from the fact that it's far from satisfying.

From a visual standpoint, it's interesting to take a look at what Studio WIT can do away from the pressures of television animation, and HAL looks pretty good for the most part - its characters are afforded plenty of detail and eye-catching designs, and the world around them is mostly well-represented without ever providing any downright jaw-dropping moments.

As the final credits role, there's a suspicion that one of Hal's biggest "crimes" is simply that it tackles subject matter that has handled - and handled better - elsewhere, whether it's Time of Eve within the sphere of anime or countless science fiction literary writings. Admittedly Hal has some fresh thoughts and ideas to offer even in comparison with these works, but the lack of focus on any one item on its agenda leaves behind the feeling that is primarily a rather gimmicky love story with sci-fi overtones painted on top of it - not a bad thing in and of itself, but without a sufficiently careful building of its main pairing and their relationship to one another even this feels a little flat.

As a result, Hal is worth watching - and perhaps even worth watching twice so that you can pay more heed to how it builds to its big reveal - but can't shrug off its flaws and loses a lot of its potency on account of them.

6
It has interesting ideas positioned in an originally way, but its execution is too lacking in depth or emotional resonance to have the impact that it desires.
LATEST REVIEWS