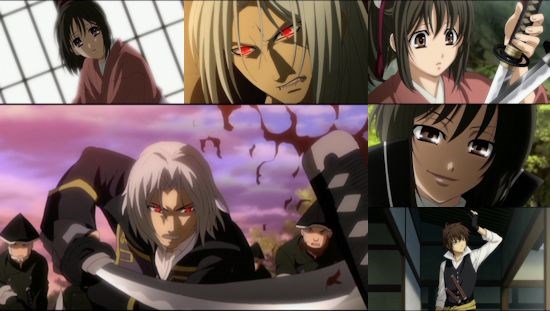 The first season of Hakuoki was, put simply, a slow-burner - lots of talking, moody glances and occasional outbursts of emotion that took a lot of time to really reveal any of the underlying key points of its story. Thankfully, by the end of that series Hakuoki's stall seemed to have been set out, and its emotional climax seemed like a perfect lead-in to what should be a stronger second season. Now that season - subtitled Record of the Jade Blood - is here, so can it execute on that coveted potential?

Starting in 1868 and continuing through that year into 1869, this ten episode series of Hakuoki begins with the Shinsengumi returning to Edo and a move to a new headquarters as they ponder how they can possibly hope to defeat the Sacho. Tasked firstly with defending Koufu Castle from the Imperial Army, the Shinsengumi are outfitting with new clothes (a legitimate excuse to change their wardrobe and also increase the merchandising potential if ever we saw one!) but find themselves fighting in a series of what look to be ever-more unwinnable struggles against powerful opposition that aren't shy in showing their hand.

Needless to say, some of that opposition also brings Hakuoki's supernatural elements to the fore, as Chizuru's nature as a "devil" rears its head as the potential solution to the urges and pain suffered by the furies within the Shinsengumi. In fact, Chizuru is rather popular all of a sudden - not only has she become a crucial part of the Shinsengumi's fighting machine (in theory at least, as she still spends a lot of time running around and not actually doing all that much), but she also finds herself courted by a very surprising enemy who is painfully familiar. This also serves as a reminder of her original goal - that being locating her father, a goal which is brought into painful focus later in this series.

In other words, there are no shortage of important and powerful moments scattered throughout this series, but many of these still pale into comparison with the true centre point of Record of the Jade Blood, that being the relationship between Chizuru and one of her Shinsengumi counterparts which snowballs throughout this season to its painfully bittersweet climax.

Although this doesn't fix all of the issues we had with Hakouki's first season, it does make for a substantially more enjoyable viewing experience - there's plenty more action on show in this second series (although only some of it is really afforded anything notable in terms of animation), some of the show's twists and turns are compelling even if one or two of them feel a little rushed and under-utilised, and the core relationship which powers events gathers pace and meaning in the second half of the series in particular to stand up in its own right... assuming you aren't too sore about the rest of the cast being largely jettisoned in favour of this specific pairing.

Sticking with the positives, the English dub of this second season isn't quite as bad as its predecessor, which is to say that it's still bad, just less egregiously so - we'd still advise sticking to the Japanese audio and competent English subtitles as a result, even though some of the use of language and colloquialisms in both English dub and subtitles don't exactly match the period within which the series is set! That aside, the show's DVD transfer is decent enough and perhaps shows a slight upgrade to the show's budget in its overall animation quality, while extras are restricted to the usual text-free opening and ending credits.

Taken as a whole then, and coming off the back of a strong finale to its first series, Record of the Jade Blood has a fair amount going for it.  It can still prove to be ponderous all too frequently when it would be better served thrusting itself into the thick of things, Chizuru remains an utterly bland lead for the most part, and there's a rich historical context that requires knowledge beyond the goings-on in the series alone to be fully enjoyed, but having said that there's a strong and well-told story of love and conflict in the midst of Hakuouki's second season, so if its subject matter and otome trappings appeal to you then it's certainly worthy of your consideration.

7
It still has a number of glaring issues, but for the most part this second series of Hakuoki is a far stronger and more compelling narrative experience than its forebear.
LATEST REVIEWS