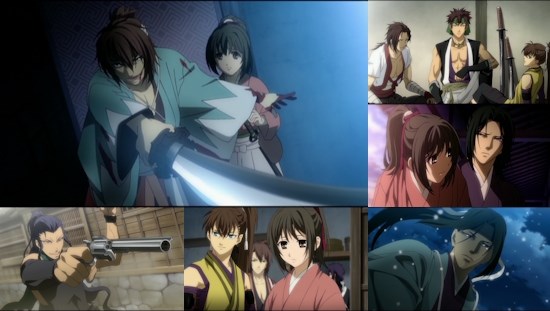 In spite of a growing female fan base within western anime fandom - some statistics now point to a 50:50 split between male and female fans - we still don't really see all that much anime output aimed at a female audience reach the UK. Beyond gender-bridging big hitters like Fruits Basket or Ouran High School Host Club, UK fans have been left to turn to streaming services or imports from elsewhere to get a hold of many of their favourite series. Perhaps Hakuoki is the first sign that this might be changing - with its original game now translated into English and made available on the Nintendo 3DS, the franchise's various anime adaptations will be reaching the UK this year courtesy of MVM Entertainment, starting out with this first season from Studio Deen, subtitled Demon of the Fleeting Blossom.

Our protagonist and guide for the Edo period series is Chizuru Yukimura, a young girl who we find instantly plunged into danger - pursued at first by some samurai, who are then in turn attacked by a rather unsavoury half-human creature. Just as it seems as if Chizuru is done for (thus creating the shortest anime series ever known), she is saved by the timely appearance of some Shinsengumi, or special police forces. Although her life has been saved, it seems that this may only be a temporary reprieve - having passed out in the aftermath of those shocking events, she awakens to find herself bound while her saviours (and now captors) discuss whether they should dispose of this young witness to events that she really shouldn't have seen.

As the realisation sinks in that Chizuru is in fact a girl (something that they failed to initially realise), and as she relates the reason she was in such a dangerous situation in the first place, so these Shinsengumi take pity on her. More importantly, it seems that both parties also share a similar goal - while Chizuru is searching for her missing father, so this man also appears to be an eminent scientist who the Shinsengumi are also trying to track down.

Thus, an uneasy relationship is formed between Chizuru and the Shinsengumi which gradually gives way to some level of mutual trust, both organically and out of necessity. With the political situation in Japan threatening to spiral out of hand however, life is becoming ever-more dangerous for those concerned, and as the series progresses it becomes clear that there's more than meets the eye to both Chizuru and her protectors as supernatural elements come into play to increase the threat to the cast yet further.

Although these supernatural elements feel like they've been crafted as the main focus of the show, it certainly takes a long time to dig into the core of Hakuoki's narrative - much of the first half of the series is instead spent exploring the world and history of the series, which feels decidedly flat unless you have a keen interest in this era of Japanese history already. In fact, Hakuoki clearly expects that you have a reasonably robust knowledge of 1860s Japan (or 1960s Japan, as one unfortunate on-screen sign translation error suggests in one episode!), so without that prior knowledge you might be left scuttling off to Wikipedia to get a full appreciation of the turbulent times around which the series is based.

Of course, Hakuoki isn't entirely obsessed with historical accuracy (as proven by its anachronistic use of language throughout), otherwise we wouldn't be presented with the story of demonic bloodlines and strange "medicines" with horrendous side-effects that powers the story - it's only in the second half of Demon of the Fleeting Blossom that this becomes a pivotal part of the story, and things become that much more interesting as a result. By the end of this first season, Hakuoki is making good use of this concept and the relationships between characters to deliver its story, all the way through to an ending that sets itself up for more of the same in series two.

It is, however, a shame that there isn't a little more to the main cast of characters - were it not for the fact that she becomes a target for certain events later in the series, Chizuru may as well be a Will-o'-the-wisp, such is her complete lack of impact upon events that leaves her marginalised as little more than a token female and blank slate for the viewer to project themselves upon. The bevy of male characters that make up the Shinsengumi are at least far more proactive in their behaviour, but it takes a long time for any kind of character to be stamped upon most of them beyond the simple character tropes initially bestowed upon them. It's perhaps a testament to the series that it ultimately manages to pull some reasonable drama out of this forgettable crew, but the story could have delivered so much more had it been given a better realised cast to work with.

While the Japanese voice cast do a respectable job of imbuing these characters with personality, the same can't be said for Hakuoki's English dub, which is uniformly terrible and perhaps one of the worst modern dubs we've ever had the misfortune of witnessing. Every character's delivery is so flat and monotonous that it makes an already slow-moving series almost unbearable, beyond the inadvertent comedy of characters delivering lines in the midst of a life or death situation while sounding more like they're waiting for the number 62 bus on a particularly unremarkable day. In other words, stick with the Japanese audio for this one - a couple of small errors aside, the subtitle track is just fine for this purpose.

Despite short bursts of action, Demon of the Fleeting Blossom isn't a tour de force of animation - at times, it looks a little clunky and cheap but for the most part it's a passable and effective enough at delivering the story, topped off with some occasionally decent-looking moments. The same can be said about the show's UK DVD transfer, which looks just fine and isn't exactly worked too hard by the series. A competent effort all-round visually speaking, then.

At the half-way point of this first season of Hakuoki, we were all set to give it a bit of a critical panning - it's almost tortuously slow-going and has little to offer unless you have a particular interest in its historical context. Thankfully, and provided you can make it that far, the second half of this series is a definite improvement - it's still no classic, but it at least derives some drama from its scenario while also progressing its story in some interesting ways. Hopefully this serves as a lead-in to a more impressive second series, as there's certainly potential here, even if it took entirely too long for it to be extracted.

5
Its English dub is atrocious and the first half of the series incredibly slow, but things pick up notably in the second half to prevent Hakuoki's opening gambit from being a complete failure.
LATEST REVIEWS