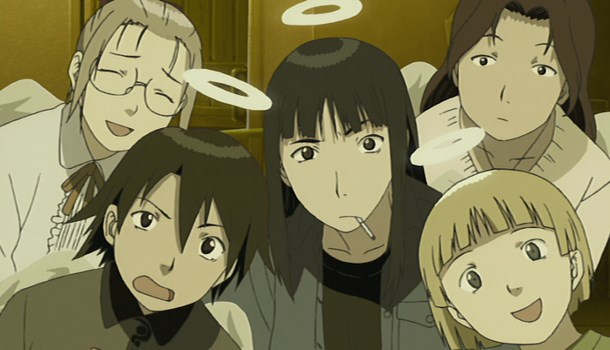 If you could sum this anime up in one word, it would be "classy". The gentle music washes over you from the outset with a soft-focus DVD menu drawn in subtle pastel shades, easing you gently into the world of Haibane Renmei.

The story centres on a girl called Rakka, who first dreams of falling from the sky, before waking up in a giant coccoon. Yes, once again we're that special twilight zone that only anime can really handle, and Haibane Renmei starts with a particuarly strange premise. After hatching, Rakka grows a pair of feathery wings and starts to learn about the world around her. Fortunately the Haibane are a friendly sort, and the world she wakes up in is a 19th Century European idyll. The story gently explores Rakka's newfound world, the Haibane themselves and their relationship with the humans living in the town.

The series is based upon the drawings of Yoshitoshi ABe and his self published works, the Charcoal Feather Federation. ABe, who also worked on Lain and Naia Under 7, brings a unique style to the series which borders on arthouse. It certainly helps retain your interest, as there's always something worth looking at even during the slower moments.

Seeds of intrigue are skillfuly sown, but the story never loses its relaxed pace and we're swept along in a series of charming encounters. Basically, if you're an action junkie you're going to find this boring as hell, but for those prepared to invest their time, there are plenty of rewards to be had.

Animation is nice if not spectacular, but the music is beautiful, adding enormously to the atmosphere. In many ways its the antithesis of Kino's Journey, which is also a slow paced but thoughtful journey of discovery - but where Kino is extremely bleak, finding darkness in the most unlikely places, Haibane delights in the small, wonderful things in life, making for a much more uplifting experience. Given the choice between the two, I know which I'd choose.
9
Beautiful.