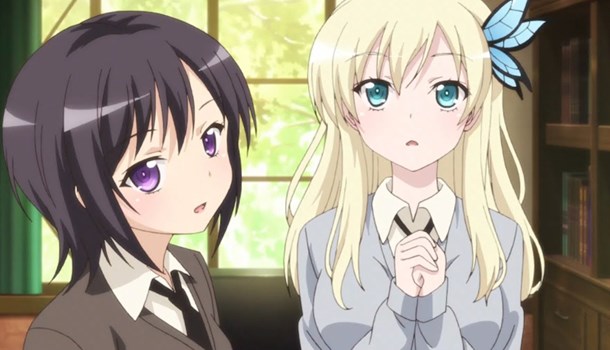 Boku ha Tomodachi ga Sukunai ("Haganai" for short) is the latest in a line of decidedly otaku-centric comedy series, designed to both identify with and pander to the unique proclivities of the hard-core anime fan. Not that this is necessarily a bad thing, as the relative popularity that OreImo enjoyed both in and outside of Japan proves - even a carefully, even cynically crafted "land grab" for a target audience can be entertaining if it's well written and delivered.  Although we haven't had the joy of that particular series reaching the UK, we are able to take a look at Haganai courtesy of FUNimation's YouTube channel as it allows us one of its rare embraces into its streaming bosom.

It's probably easiest to start any synopsis of this show's plot with a translation of its full Japanese title - meaning literally "I have few friends", you can probably guess right from the off where the show's starting point might be.  Our protagonist on this journey is Kodaka Hasegawa, a nice enough lad whose school life is blighted by his appearance - with narrow eyes and uniquely coloured hair (yes, even by anime standards), Kodaka looks to all intents and purposes like a delinquent, meaning that both fellow students and teachers view him with terror without any opportunities for him to show them that he's not such a bad guy after all.

Kodaka isn't the only individual within the school with such an issue, as he soon discovers when he stumbles across a rather odd girl talking to herself (or rather, to her "air friend") in an otherwise empty classroom.  Rather than her looks, it's her attitude that prevents Yozora, the girl in question, from forming friendships with others, but somehow this unlikely pair strike up an agreement - the creation of a "Neighbours Club" in the hope of finding the much sought-after friends they desire.  Although Kodaka is reluctantly co-opted into the club at first, the group's numbers slowly but surely grow as other misfits join and enter to create a solid (if decidedly oddball) group of friends... if only they'd realise the bonds that they've formed for themselves.

Given this concept, it's no surprise that the character roster of Haganai is largely an exercise in box-ticking - aside from the largely affable Kodaka himself, you have a cross-dresser, a science boffin with an unhealthy interest in mecha, a girl who becomes obsessed with gaming and later with Kodaka's sister Kobato, who is herself an out-and-out otaku and a diminutive, under-aged nun to throw into the show's mix.  As blatant attempts to cater towards every anime fan's favourite archetypes go it's a pretty brazen effort, but to some extent it works - there's a certain amount of amusement to be had from all of the characters from time to time thanks to their antics and proclivities, although ultimately the show settles on the main trio of Kodaka, Yozora and aforementioned busty gamer girl Sena as the real focus of their efforts.

In a broader sense however, Haganai is very much a series of two halves.  After setting up its initial premise and starting to build its harem... sorry, after-school club... the show delivers some great and hugely funny episodes - the initial group's attempts to play a co-op game of Monster Hunter is frequently hilarious, while the show's dialogue as its characters bounce off one another lights up the screen regularly.  Although the introduction of more characters to the club threatens to bog down the series, everything seems to be going well.

Unfortunately, as we move into the second half of the series the show begins to unravel - that initial video game-themed episode is quickly followed by another, far less funny, gaming-led instalment, while even sure-fire comedy concepts such as a visit to karaoke or the swimming pool fail to do anything noteworthy with their subject material.  Haganai's attempt to build some drama into proceedings stumbles somewhat as well, with Kosaka's memories of a cherished childhood friendship not so much foreshadowing later events as spelling them out in big neon lights.  Even more critically, the show's characters themselves begin to undermine the series - most notably, Yozora's snarky, bossy attitude which works so well in early episodes turns to bitchiness and then downright bullying, making a character we're supposed to empathise with at more akin to a figure worthy of hatred.  Sena isn't much better either, as her obsessions get the better of her and become something of a dead horse which the series insists upon flogging.

These issues hole the series quite seriously below the waterline, and although the continued use of snappy and smart dialogue bails out enough proverbial water to stop the show sinking entirely, its early humour and entertainment value is mostly washed away by the time we reach its climax - a victim perhaps to its own light novel source material as much as anything this anime adaptation does wrong in its own right.

This deflated feeling leaves Haganai as a series that's tough to recommend - if you're a fan of other comedy series aimed squarely at the self-professed "otaku" crowd then you'll probably want to watch the first few episodes at least to enjoy a series that knows its audience and delivers admirably.  Beyond that, watching the series becomes an increasingly uphill struggle with fewer and fewer magic moments to make it all seem worthwhile - we wouldn't blame you for losing interest in Haganai half-way through, making it ideal fodder for casual streaming viewing but perhaps ill-suited for a physical release.

Haganai is currently available to the UK in streaming form via FUNimation Entertainment's YouTube channel.

6
A bright start gives way to an increasingly tired and even unlikeable second half to the series - you might want to check out the first few episodes just to enjoy its sharper comic moments however.
LATEST REVIEWS