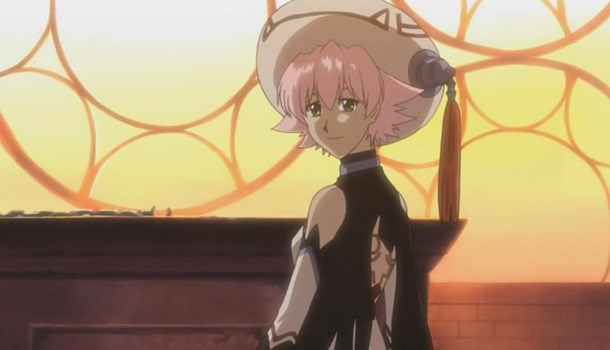 Episodes five to eight move the story along a little but it's clear it's not really going anywhere yet.  A fan of the series might try and call it good character development but I say it's just slow paced.   Trust me, I know slow paced when I see it.  I enjoyed Crest of the Stars.

During the course of the episodes the members of the Twilight Brigade search for a series of objects called Virus Cores as they think they may be able to unlock the mystery around The Key of the Twilight.  All well and good but since you're shown that they're being set up for a fall, it kind of takes the edge of it.

Our main character, Haseo, still spends lots of time being a mardy little nerk but is showing some signs of changing by warming to the other brigade members. The supposedly enigmatic figure of Ovan however continues to spend most of the time standing still and staring into the distance and doing bugger all.  Quite frankly I'm beginning to think that these moody moments are all about saving on the animation budget.  Even the fights are ridiculously brief or shown in an oblique manner.  Characters can spend four times longer running towards each other (I say running towards each other.  I mean there's a head shot and the background sort of blurs off to one side in a cheap kind of way) than actually fighting.

There do seem to be some plot curiosities but as with .hack//SIGN I suspect some of them will simply be red herrings or references to other parts of the mammoth .hack franchise which only an existing fan will get.

The voice acting is very professional but the selection of certain English actors/actresses seems odd.  For instance the character of Tabby is supposed to be a sixteen year old girl but her voice actress, Maryke Hendrikse, makes her sound much older which I think sits poorly with the characters childish enthusiasm.

If you enjoyed volume 1 then you'll enjoy this.  If you enjoyed the .hack//SIGN series then you'll enjoy this.  If you thought .hack//SIGN was alright then I'd give this a miss as you'll see so many similarities you'll kind of be able to guess where it's going from the start.  If .hack//SIGN made you want to chew the DVDs in frustration when it failed to explain itself properly or throw something at the TV when the characters just kept acting stupid and miserable, then you should avoid this like the plague.

This special edition comes in a collector's box which has room for two further DVDs to be inserted.  There's a second sound track CD (twenty bgm tracks and three vocal tracks performed by ALI PROJECT) and a small dangly thing that you're supposed to attach to your mobile phone apparently.  The disc itself comes with clean opening/ending animation, TV spots and some trailers.
5
For Hack fans only.
LATEST REVIEWS