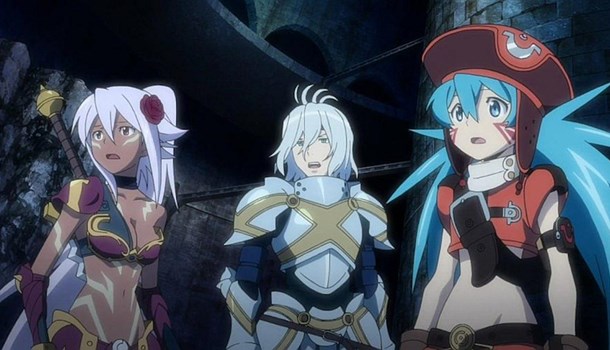 Set in the online MMORPG The World, .Hack Quantum concerns three high school girls who venture online together for a spot of questing to break the monotony of study and everyday life. Taking on the form of striking avatars (who fans will recognise as riffs on the very familiar Kite, Black Rose and Balmung avatars of the original series), the girls become embroiled in a rather tragic story whereby one player could destroy not only The World, but everyone logged in too.

For those who aren't aware, .Hack is a massive fictional universe spanning video games, anime and manga. It has a massively convoluted history and takes a degree in breadcrumb-following to unravel, especially since a lot of it is unavailable in English.

Fear not however, for this three episode OAV is, like .Hack//Twilight, completely self-contained and enjoyable in its own right. There are, for long-term fans like me, plenty of nods to previous entries, but they're very much in the background.

While the anime has a serious and somewhat epic battle at its heart, the story remains mostly light-hearted thanks to the slightly ditzy kleptomaniac lead, Sakuya (real-life name Aida Asumi). She's extremely likable, and a rare treat for an anime heroine these days.

In fact, what impresses most about Quantum is the amount of personality, detailed relationships and mystery that has been crammed into three episodes. Its infinitely more interesting to watch than the twenty-six episode series, Hack//Roots. In fact, it really does feel more like a movie, and at times it reminded me of a Studio Ghibli piece with its character mix and pacing. No bad thing at all.

The show looks stunning as well. The mix of CG and animation is beautiful, and some of the touches, such as a computer screen hovering above parchment, are wonderfully realised. The colours are vivid, and some of the scenery really pops out; especially the scenes set at dusk, imbued with oranges and purples. It should come as no surprise that this was made for HD consumption, although sadly we only have the DVD over here for now.

Downsides? Well, lack of Blu-Ray aside, the plot does rehash the old .Hack tropes again. Your mileage will vary as to how irritating this will be for you, but watching people fall into comas and having yet another character develop the power to distort the rules of The World have been done to death now, and frankly any game that puts people into a coma, whether proven or not, would surely have been banned by this stage... I'd also like to know why this particular cover was chosen when the Australian release looks so much cooler - I'd really like to see this do well, and the weak cover doesn't help its case.

Plot rehash/holes aside, this is a wonderful adventure. I've read reviews that criticise it for relying too heavily on prior knowledge, but in my opinion anyone who knows what an online RPG is will have no problems enjoying this charming, perfectly paced adventure with plenty of eye-candy. That's enough for me to highly recommend it, and if you enjoy this, why not take a look at Tower of Druaga too?

Where to begin? English and Japanese audio with English subtitles aside, there are three animated shorts starring the Chim Chims (mascot characters from inside The World) which are charming if not overly hilarious, and some shorts by Ogura Yui (Hermit's VA in the Japanese dub) doing... well, just stuff really. There are also promotional videos and trailers for the series.

9
A perfectly judged piece of animation, just long enough to hack into the heart of any fantasy fan.