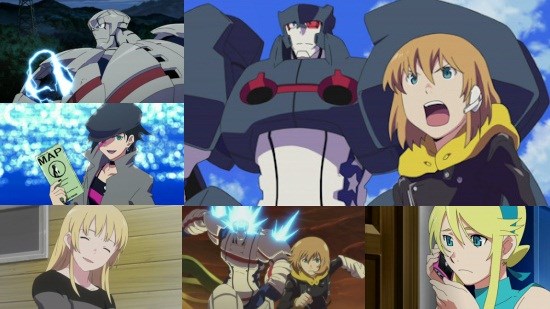 When we last left HEROMAN at the show's half-way point for our previous review of this streaming series, our pint-sized hero Joey Jones and his toy robot come super-powered machine Heroman found themselves on the run from the American government, as their place as heroes had somehow been twisted into one of villains by the paranoia of the powers that be.  After all, an entity as powerful as the "white giant" they'd seen handing out a beating to the Skrugg couldn't be completely dedicated to doing good, right?

As Joey's escape from the NIA looks increasingly futile, despite both Psy and Professor Denton doing their bit to aid his flight, so the tables turn and the true enemy of Heroman is revealed as we realise that the NIA's top agent isn't such a bad chap after all; if only the same could be said for oddball genius Doctor Minami, who clearly has a chip on his shoulder about his grand plan being upstaged during the Skrugg invasion previously.  This eventual face off between Joey and Minami, and more importantly their respective robots, brings this second major story arc to a conclusion with a hefty bang, and yet another example of this show's ability to craft some compelling action scenes when the plot requires it.

With Heroman living up to his name in the eyes of the public once again, we move towards the final major storyline of the series, although unfortunately we only do so via some pretty standard anime fare, be it a beach/desert island episode or Joey's big sister Holly playing detective - both elements which fit into and reveal certain layers of the "big picture", but that progress is achieved in a borderline irritating way at times that only serves to detract from the overall tone of the story arc.  After all of this and a little bit of background exposure to the fate of Joey's father, we're finally ready to take off on the action-packed roller coaster of the final episodes, which can't come soon enough for the series in many ways.

In many ways, HEROMAN suffers from the exact same blight which often affects both twenty-six episode anime series and middle-aged men - they tend to start sagging in the middle.  After all of the energy of its initial alien invasion story, the series took an episode or two to get back into its groove but was ultimately successful; when it comes to the second half of the series however, HEROMAN struggles to inject any sense of threat or urgency into proceedings until it's almost too late, providing episodes that have all of the bland feeling of mediocre filler when they in fact fit solidly into the chain of events to come.  None of these instalments are terrible, but they certainly won't set your pulse racing either.

Thank goodness then that the huge final confrontation that faces Joey and friends is worth wading through all of those middling episodes for, with the penultimate episode in particular serving as an advertisement of what this show can do when it puts its mind to it before wrapping things up with a brave emotionally charged but ultimately satisfying end which fits everything that has gone before to a tee.  The series even ends by hinting at a sequel, but given the Japanese sales and viewing figures I've heard floating around I wouldn't count on it unless it gets syndicated for TV broadcast in the US - something which it might succeed in doing given its "Saturday morning cartoon" ethos and the pull of Stan Lee's name.

It's that Saturday morning feel that HEROMAN generates that we've lauded throughout this series, and when it's on form it certainly knows how to evoke the simple pleasures of watching an everyday kid turned hero making mincemeat out of evil aliens, while also providing a likeable set of characters that play their part solidly without ever disintegrating into the whiny "why me" tantrums that so often plague shows of this kind.  Those high points make HEROMAN a fun and almost nostalgic viewing experience; if only it had managed to keep that level of gleeful enjoyment running at full pelt throughout, rather than dropping the ball and threatening to become tiresome before reaching its all time high mark only just in time for the show's big finish.

You can watch HEROMAN in streaming form right here at UK Anime Network!

7
The second half of HEROMAN loses some of its energy compared to the first, bolstered only by cracking endings to the two story arcs contained within it.
LATEST REVIEWS