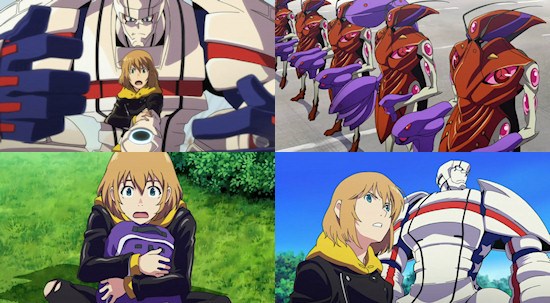 Even if you pay little attention to popular culture outside of Japan, you'd be hard pressed not to recognise Stan Lee's name, perhaps most notably for his work as the co-creator of Spider-Man as well as numerous other well-known Marvel Comics characters.  However, this year sees Stan Lee branch out into the world of anime, collaborating with Studio BONES to create an original story that has also seen the light of day in manga form, blending a typical anime aesthetic and principles with some western story-telling nous.  Luckily, we get to see the result of this cultural collision in streaming form via Crunchyroll; is HEROMAN shaping up to be the beginning of a beautiful collaborative friendship?

Certainly, the American influence of HEROMAN's writing can be spotted right from the off, with all of the action centred around a fictional town on the West Coast of the United States - No battling evil in and around Tokyo here.  We drop into the show's world via a (rather effeminate looking) boy named Joey - A nice-enough lad who lives with his grandmother, and whose place as the apple of cheerleader Lina's eye causes him issues when it comes to her brother Will and his rather obnoxious band of friends.

Of course, as is always the case with stories of this ilk, the mild-mannered Joey's life changes forever as events around him unfold - In his particular case, the retrieval of a toy robot dumped in a rubbish bin and lovingly repaired by him proves to be the catalyst for a set of circumstances which gives him power beyond his wildest dreams.. Or should that be worst nightmares?  Regardless, the birth of HEROMAN (as Joey rather imaginatively names his robot) couldn't have come at a better time, with a threat to the entire planet about to all-but literally land on Joey's doorstep.

As you might already have guessed from that brief plot synopsis, HEROMAN's story evokes memories of those Saturday morning cartoons we all used to watch as kids, and indeed almost every aspect of this show's opening episodes very much brings to life that nostalgic (albeit slightly more grown-up) Saturday morning feeling of cooing over the powers in the hands of a young everyman who could be you or I as he faces up to some kind of alien menace.  Even the characters employed by HEROMAN hold the same sense of inclusiveness and cliché as those cartoons of yesteryear, from the pretty blonde and the dumb school bully through to the slightly disabled friend who still manages to exude cool and attitude in the face of any disadvantages from which he might suffer.  Our hero Joey also fits firmly into the traditional Stan Lee template as an initially unwilling saviour who is afraid of and conflicted by his new powers when he initially receives them, rather than thrilled as many of us imagine we'd be in such a scenario.

If you're expecting anything fresh or new from HEROMAN then, you can well and truly forget it, but to be honest it's quite clear that this series isn't trying to forge ahead into uncharted territory or break new boundaries in story-telling.  Instead, HEROMAN sets out to be a fun, uncomplicated and simple tale that will hold your attention by keeping the action coming and the peril constant, and this is something that it manages with aplomb in these first few episodes.  Even though you find yourself giggling to yourself at the sheer cheesiness of it all from time to time, that's actually part of the fun of the entire experience, and even in spite of this you can't help but cheer the show's protagonist on once HEROMAN is rolled out and starts whaling on the slimy insect-like alien invaders.

This is helped along by the show's polished presentation throughout, with colourful animation and a perfectly matching soundtrack the order of the day to further help keep the plot's wagon rolling.  There really is very little in the way of depth to the series at this juncture, but when a show is as fun to watch as HEROMAN has proved to be so far, who cares?

At the time of writing, HEROMAN can be viewed in streaming format from Crunchyroll - The first three episodes are currently available to be viewed on the site, with a new episode released every Thursday.

7
You probably won't find a more predictable anime series this year, but that doesn't stop HEROMAN from being tremendous fun.
LATEST REVIEWS