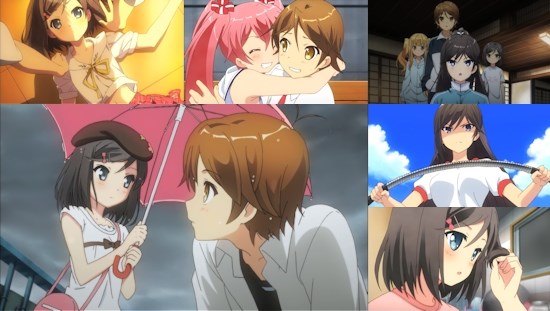 The show's protagonist, Yoto Yokodera, certainly has no qualms about his perverse nature - at least inwardly he doesn't. However, while his mind is a swirl of bathing suits and bosoms, outwardly Yoto keeps up a facade of placid normality. It's a facade that Yoto is convinced is stopping him from fully enjoying the world's pleasures, and he's determined to rid himself on it - enter a mythical cat statue, which is rumoured to take unwanted traits for a person who wishes upon it.

Yokodera isn't the only one who wants to change their persona however, and a visit to the statue brings about a meeting with the wonderfully named Tsukiko Tsutsukakushi (try saying that after a few drinks), a girl who wants to do away with her childish demeanour and become more mature. So it goes that the pair make their wish, and of course the granting of these wishes have decidedly unintended consequences for them both, leaving Yokodera as an out-going pervert who can't stop himself from making inappropriate comments, while Tsutsukakushi becomes an expressionless doll.

As opening gambits go, this makes for an entertaining and fun start to the series - watching Yokodera getting himself into all sorts of trouble as he can't stop himself from spouting off exactly what he's thinking is amusing and a refreshing break from your typical lead male character in this kind of series, while Tsukiko's deadpan delivery of her lines is a delight in itself.

Unfortunately, this initial story arc ends rather quickly - Yokodera soon regains his facade, and thus the most fun aspect of the show is lost. From here, we're left in more typical romantic comedy territory, as Yokodera finds himself at the centre of a harem of girls vying for his attention, even if it's Tsutsukakushi who is really the personality that deservedly takes centre stage towards the latter part of the series.

This leaves us with an inoffensive little series that has some bright moments and enjoyable snippets, but in a wider sense it does nothing to define itself in a sea of similar harem romantic comedies which are ten-a-penny in the world of anime. This mediocrity is all the more disappointing given the show's early promise - this could have been anime's Liar Liar, but such an opportunity is quickly shunned for what proves to be less fertile soil. It certainly looks the part and hits a lot of the standard beats for this kind of series, but if you're looking for anything fresh from or memorable from The Hentai Prince and the Stony Cat then you'll be left disappointed.

You can currently watch HENNEKO in streaming form via Crunchyroll.

6
An unspectacular series that hits all of the notes that you might expect, but you can't shake the feeling that it could have done so much more with its cast and premise.
LATEST REVIEWS