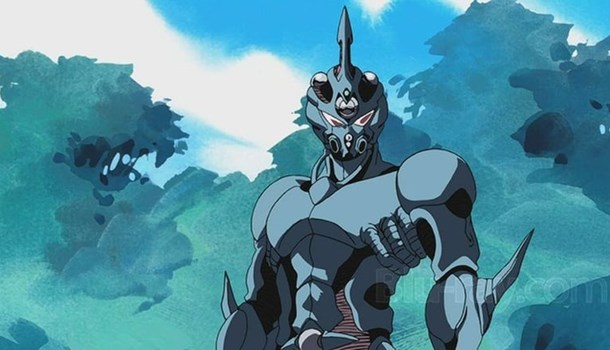 When I last watched The Guyver from ADV, I was pretty unimpressed with both the pace and the production values. It came across as a bit of a poor series, and one which could certainly have done with more love and attention paid to it. Can the following volumes make amends?

Suprisingly the answer is a resounding "yes". Whilst the production values are still pretty poor (especially the backgrounds, which are laughable at times) the script has managed to achieve the improbable and make such matters almost moot - because The Guyver really kicks it up a notch with these two volumes, and it survives on pure adrenaline.

These two volumes cover Sho's fight with Chronos Japan and the Guyver II unit, and his following fight for survival. It's good stuff, with lots of casualties on both sides and some pretty well directed fight scenes and revelations aplenty to keep you glued to the screen.

Sho's allies find themselves in dire straites as the odds are packed against them, and given some of the repurcussions of Chronos' rapidly expanding influence, victory is not a given. It's this "could go either way" uncertainty that adds the spice to this series, and action fans should lap it up.

Of particular note is the fight with Guyver II, the fate of Sho's father and the introduction of an elite hyper Zoanoid unit that gives our heroes a run for their money. All the characters get some development, and the pacing keeps things fresh throughout.

All that said, The Guyver remains a guilty pleasure - it's gleefully violent and pretty cheaply produced, but just this once I can forgive the series its sins, because it entertains with gusto. It's not the most essential purchase on the shelves right now, but you could do far worse than give it a viewing.

7
Fun, well paced and action packed. A little more of a budget would have gone a long way though.