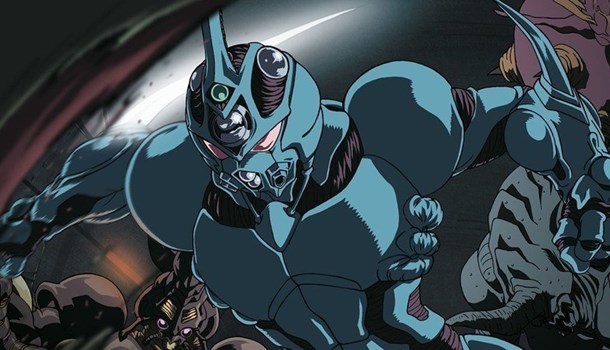 When I first heard about the re-working of The Guyver, I was a pretty happy chap. I fondly remember the cheesy monster mash that came out once a month from Manga Entertainment – it was one of their more innovative attempts to bring anime to the UK market, and I was hooked for the first few volumes (it became hard to find after a while).

The Guyver is a biomechanical unit which falls into the lap of one Sho Fukamachi, high school student and soon-to-be heroic otherworldy monster-masher. With a horde of creatures controlled by the mysterious Chronos Corporation on his back, it’s a fight for survival for Sho and his friends.

The biggest surprise was just how closely, at least initially, this first volume follows the original animated outing. Whilst I expected the new anime to follow the manga, I had expected a bit of a rejig – but no, what we have here is a scene for scene remake of the original, and whilst it may be a touch shinier, with crisp lines and rock-steady stills when paused, the animation is as restricted as its forebear, with a lot of static scenes punctuated by some lovely looking fights. It has to be said that the backgrounds are also pretty bloody awful at times.
Thankfully, toward the end of the first volume we see some variation from the animated original as the new series follows the manga more faithfully. According to the commentary, this new series will encompass the first 10 volumes of the manga, where the original series only followed the first 5.

The English dub is extremely patchy, with the peripheral characters in particular sounding detached and, in some cases, sporting hilariously bad accents. Still, that’s why we have subtitles I guess. Interestingly enough, the distortion effect on the Zoanoids is also identical to the manga release.

There’s no doubting how cool the Guyver looks, or how cool some of the battles on this disc are, but with so many other titles coming out, its allure has certainly dulled. From a personal viewpoint, I am enjoying the nostalgia factor, but new fans may well wonder what all the fuss is about.

Why not take a look at the review of the Manga Entertainment Guyver?

Where to start? A comprehensive 32 page booklet, a commentary by a couple of Guvyer manga fans, who should have cut back on the silly voices but provide some interesting insights into the history of the Guyver. There are also manga/anime comparisons and the usual clean opening/ending animation. Not bad overall.

6
Standard action fair - add a point if you're a Guyver fan, but there's better action demanding your cash.