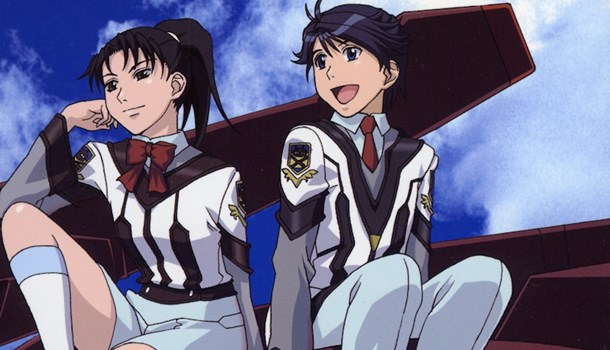 Gunparade March tells the tale of the 5121st division, a group of drafted teens who are enlisted to fight an alien invasion that has made the majority of the Earth an uninhabitable wasteland. With life-expectancy low, it's a day to day struggle to lead any semblance of a normal life.

So, it's teens in giant mechs fighting alien invaders, a plot that will be familiar to fans of Eva, Nadesico, Full Metal Panic and a whole pantheon of other anime series. Gunparade March will have to pull out all the stops if it wants to be noticed.

That's not to say that GP isn't worth watching. It does have some interesting character arcs, but it delivers them in a pretty old-fashioned manner, and I have to say the first two episodes were incredibly dull. It was only when some backstory was eventually revealed that it became moderately interesting, and even then it was pretty trite stuff.

The slow pace isn't helped by a painful dub. This really is scraping the bottom of the barrel for voice talent, and it's a sharp reminder that only a few years ago, all dubs were like this. Gunparade March absoloutely requires watching in the original Japanese, if only to avoid slipping into a coma courtesy of the limpest voice acting I've heard in 5 years.

The animation is farily standard, but the character designs themselves are all very appealing. I especially liked the uniforms, which look fantastic. Eye candy will only distract you for so long however, and it won't be long before tedium sets in again.

The bottom line is that Gunparade March delivers a series we've seen before, only better. Fans of slow burning drama will possibly find it of interest, but as an investment, this offers only average returns.

Textless opening and closing, plus a trailer for Samurai Deeper Kyo.

5
Slow but pretty, with an awful dub. There's nothing new or exciting here.