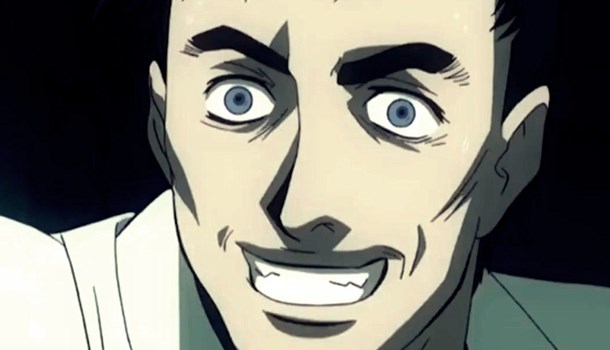 After a 6 month hiatus, Gungrave is back, and my God I’ve missed it.

Volume 5 brings us full circle with the first episode, with Brandon reanimated as an Orgman, one of Millenion’s undead soldiers gone rogue. Thanks to the superb back-story laid out in preceding volumes, we’re left with a feeling of sadness as characters we had grown fond of become darker, twisted versions of the loveable rogues we’ve come to know. And now Brandon must face those he called friends in an attempt to take down a man he loved like a brother, “Bloody” Harry.

In a way, the series has become hard to watch. Characters you were rooting for over the course of a series have become truly evil men, and like Brandon himself, it’s a grim determination to get through to the end that sees you through.

The animation remains functional, but sharp and stylish as ever. In terms of the dub, it’s truly one of the finest applied to anime in the last ten years. You get the feeling that the cast really took to this series, and they play the characters with a conviction and seriousness that makes the series all the more compelling, and quite frankly, unless you’re a purist, the dub is the version to watch.

If I have a gripe, it’s a minor one. The characters, in their evolved forms, are pretty ridiculous. Bob Poundmax in particular showcases designer Nightow’s absurdist style, with skull missiles and a studded crotch-cover being just two examples of the slightly insane (and ill-fitting) aesthetic that really weren’t required. From the grounded roots of the series, the gangster-monsters require some serious suspension of disbelief, but go with it and the show is every bit as compelling, especially as the drama plays out between Brandon and his former comrades.

So, what we have here is a very welcome return for a personal favourite of mine. If you’ve not seen this yet, get it picked up before I have to send the boys round. Gungrave is one offer you can’t refuse.
9
Welcome back boys…