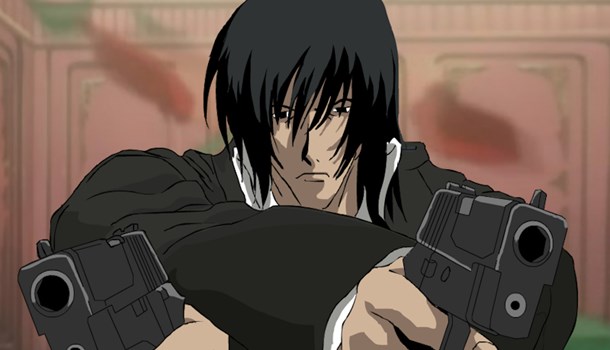 My first experience was one of dread when I saw a completely unknown character to me step out and destroy countless numbers of evil minions of some faceless organisation. Another killing spree anime I thought. First judgements are so wrong at times.

Following on from Ross’s review of Volume 1 we find Brandon and Harry beginning their membership in the Millenion organisation after fighting so hard to get their foot in the door. They each start in thankless, bottom of the ladder jobs. As the months pass, Brandon regains contact with his Maria who he finds out lives with her uncle, Big Daddy, the leader of the organisation. . We now find Brandon and Harry 5 years later as much bigger players in the Millenion organisation. Brandon has gained some extreme gun slinging skills and is now known for his ruthless dealing of the enemy as The Sweeper and with Harry’s wheelings, dealings and incredible business skills; they soon get invited to join the “Family”, the elite inner circle of Millenion. They have made it to the top, but where does it all go from here?

The revelation in the first episode of Brandon’s betrayal and resurrection as Grave hangs over this volume. You know that he is going to be betrayed by his friend Harry, but you have no idea how this will occur. At least, there is little hint of what could occur. They still treat other as friends and, to a slightly lesser extent, as partners. What happens to their friendship to lead to Brandon’s death is particularly mind-boggling.

Volume 2 is a continuation of the flashback that began on episode 2 of the first volume. It continues to depict Grave’s life as a mobster before his eventual death and is. The first volume was a bit, “meh” for me. I felt a bit disappointed during the first scene, yes, the fighting with Grave was utterly magnificent, but, I had come to expect more. The beginning of the flashback and the expansion of the story of his life in volume 2 has improved my feelings about the series. Essentially, it’s giving me a big lusting smile which makes me desperate to consume more of the series!

The music and the atmosphere of the series so far, as Ross mentioned, is incredible and it does not let up at all in this volume. I did find that the volume of the series was overly loud; the mixing of the voices with the music was a bit poorly done, with the music and effects drowning out the dialogue. This was thankfully fixed with a bit of sodding about on my side and was only present on the English dub.

The art is pretty fantastic especially during the gun battles. When Brandon/Grave draw their guns and blow the enemy away it brings a tear to my eyes. Simply incredible!

Overall, I think I am in love. Another series to add to the “Make Seb Bankrupt” list I think!

9
It just keeps dragging me along! Can't wait for Vol 3!