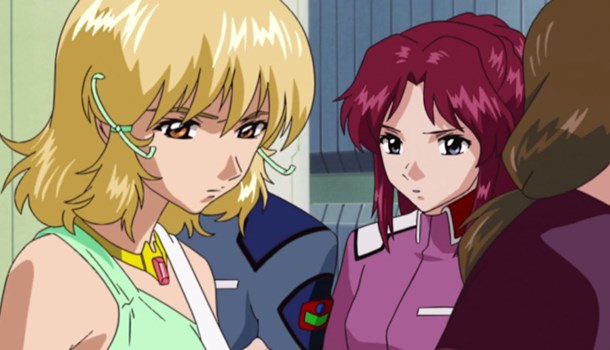 For those of you following Gundam Seed, there's good news: it's better than ever!

The second two volumes turn the action all the way up to 11, as politics, betrayal and infighting reach new heights within both the Zaft forces and the Earth Alliance. Kira's missing, presumed dead, the Earth Forces are defending the Antarctic base against the all out assault from Zaft's Operation: Spitbreak, and the Archangel is in worse shape than ever - with all this going on, and massive casualties on both sides, is there really any alternative to mutual annihilation?

Well, you'd certainly be forgiven for thinking it was curtains, but being anime, it's never over until you've seen the corpse… Halfway through volume 7, when it really does all look to be over, our hero returns with some kickass firepower and new hope for the Archangel.

But this is the least of the surprises spread across these two volumes - unlikely alliances, friendships and romances spring up everywhere, and seeds planted at the very beginning of the series start to bear fruit – new characters arrive en-masse, with new Gundam pilots, the arrival of the Astray series and the anti-coordinator movement Blue Cosmos taking pivotal roles, and more familiar characters spread across the planet and taking up new positions, the complexity of the Seed saga is both impressive and a little daunting. Indeed, character development is so involved that you could miss the 3 new Earth Alliance Gundam units and the nuclear-powered Freedom and Justice machines piloted by Kira and Athrun respectively. On top of all of this, are we finally going to see the two friends-turned-enemies fighting side by side?

Production values remain high, and the soundtrack continues to please, but where the series really scores points is the way it drags you in – even though you can guess many of the plot twists, the payoff when watching the more dramatic moments is undeniable – Kira’s triumphant return is one of the highlights of disc 7, but watching the relationship of ship’s Captain Marue Ramius and ace flyboy Mu La Flaga on disc 8 is equally gratifying, because, unlike say Witch Hunter Robin, the characters have a warmth and depth that has you genuinely invested in them.

In summary, Gundam fans have much to celebrate here – epic battles, heart-rending drama, heinous intrigue and romantic encounters, adding up to one of the best series of the year. If you love Sci Fi and haven’t seen this yet, you owe it to yourself to hunt it down – the rewards are there for the taking.

10
A bravura performance across the two discs, rivalling Gungrave for best series of the year.