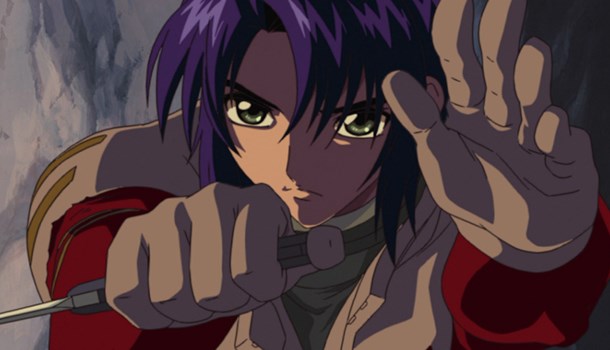 More Gundam Seed, and at the halfway point the stakes are higher than ever.

Disc 5 concentrates on the Archangel's escape from ZAFT controlled territory, and it's not an easy task. With the dual threat of Andy Bartfeldt and the stolen Gundam units blocking their path, the entire crew has to buckle down and prepare for the battle of their lives. And if they can escape the desert, there's the journey across the sea to contend with, leaving the ship a sitting duck.

Disc 6 begins with not one but two flashback episodes, allowing the viewer to play catch up with events so far. Sadly nothing new is added, and these can be skipped, leaving only three episodes of interest, which is a little disappointing. However, it's a forgivable slight given the amount of action crammed into the remainder.
Heroic sacrifices on both sides are made, and friendship truly turns to hatred as Athrun and Kira enter into a course of mutual destruction, and some of the most heart-pounding moments I've seen in a long time - the series truly hits its stride and it's almost hard to take in the number of plot twists, revelations and battles thrown at you across both volumes.

As a series, Gundam Seed excels in every area – character development, design and battle scenes that are as slick as they are brutal. With these two discs, we’re given a lot to take in – revelations about Kira’s family are the most unexpected, as well as desert Goddess Cagalli’s position in the grand order of things. Even minor characters prove their worth, with Kira’s friends making sacrifices to stay aboard the ship and fight for what they believe in.

Disc 5 also has the distinction of containing my favourite episode of the series so far. After a fierce battle, both Cagalli and Athrun are stranded on the same tiny island awaiting rescue. Despite Cagalli having the drop on Athrun, it’s not long before she’s his prisoner, and as the two get to know each other they gain a mutual respect. Seed is always at it’s best when developing it’s characters, and this episode stands out as a touching break from an otherwise frantic war, and sets the groundwork for one of the most promising relationships in the series to date.

So, despite two throwaway episodes, we have two discs containing the best action scenes to date, some truly memorable moments and my own personal favourite episode, not to mention a new intro promising some incredible new Gundam mechs in the near future.

8
Loses a mark for the two catchup episodes, but really, if you haven't bought into this series yet, you really don't know what you're missing!