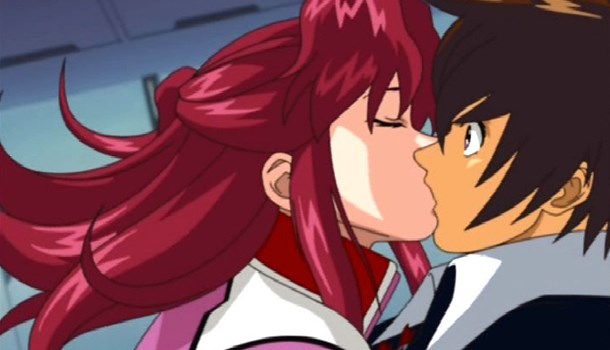 The second pair of Gundam Seed DVD's to arrive in the office mark a major shift in the series, and there's a huge array of emotion, betrayal and tragedy crammed into each shiny disc. Just the way we like it ^_-

Volume 3 draws a close to the "Escape to Earth" arc, with Kira on trial for mutiny, a refreshed and refuelled ZAFT on the hunt, and the arrival of the Earth's 8th Fleet, all of which make for an explosive, violent and desperately sad battle above the Earth, with Kira charged once more with the protection of the crew and the refugees, despite his pacifist beliefs.

The tension in these first few episodes is palpable, with Kira's friends making some major decisions and the Archangel crew starting to show cracks amongst the ranks, it's a very gripping first half.

Once the dust settles, the DVD shifts gears, with a detailed history of co-ordinators and a few tantalising glimpses behind the scenes of Le Creuset's worldview, and closes catching up with a now Earthbound Archangel, stuck deep in the heart of ZAFT controlled territory.

And it's here that we stay for the fourth disc, with a new and deadly enemy, Flay's increasingly manic behaviour and Kira's shattered confidence all colliding in a web of emotions, not to mention fistfights between the crew!

Technically the series still looks superb, however the repeat animation is starting to become a little noticable, but given that there are only so many ways you can launch a mobile suit, that's forgivable. The series remains crisp, well animated and even the English dub is watchable, though purists will doubtless watch the subtitled version. Extras are fairly light, but with 5 episodes on each disc of such quality, who cares?

Gundam Seed may be a mecha show, but its easy to forget about the impressive hardware due to the superb characterisation. The drama and intrigue take centre stage and you just have to watch the next episode to see how it turns out. With so much going on, a huge cast and some truly memorable moments, this is a series that really does grab you, and personally I can't wait to see the next episode.
9
A gourmet feast of emotions, action and intrigue!