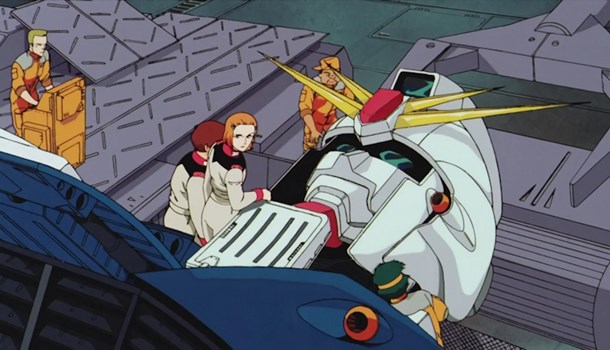 Gundam F91 wants to be a series so badly it hurts to watch.

Set 30 years after the events of Char's Counterattack, peace reigns across the human colonies and Earth itself. But as usual malevolent forces are at work, in this case represented by the Ronah family, who believe that 90% of humanity is useless and must be eradicated in order to create a new and more manageable species. The plan is to proceed once the Princess has been recovered from one of the space colonies. Enter our hero, Seabook, and his friends, who must weather the coming atrocities if humanity is to survive...

Sadly, Gundam F91 fails on almost every level. It's brutal and, at times, hard to watch. Seeing civilians slaughtered isn't my idea of entertainment, but it's the crux of every major battle scene in this film. The logic behind these attacks, instigated by the Ronah family and their Crossbone Vanguard, is thin at best. You don't need to suspend disbelief so much as launch it into orbit.

The main protagonists also fall flat - there's just too many people and not enough screen time, leading to confusing plot twists and choppy editing - one cast member defects with little back story and simply appears on deck repainting her mobile suit - little matter as she's summarily executed in the next battle anyway! This should have been a shocking revelation followed by tragedy, instead it's over so fast you can't make head nor tail of it, especially given the countless other massacres you get through in the 124 minutes (though it seems far longer).

Gundam F91 succeeds on one level however. Until the first half hour of this film, I had never considered mobile armour sinister, but the opening raid on Seabook's colony is so brutal and uncompromising that these suits of giant armour take on a new level of menace. One scene shows a Federation mobile suit shot down, land on some civilians and, most creepy of all, it's hand becomes stuck rotating at speed even after it's destroyed. This image made these suits seem like real machines, and it’s quite an affecting moment.

The animation itself ranges from superb to awful, and although both mecha and character designs are attractive (the F91 in particular is a fabulous design) they're very much of the period - the 80's fashions make for some unintentionally hilarious moments, but overall it retains the classic elements that make it uniquely Gundam.

Extras are also thin on the ground, with nothing more than a few Japanese trailers for Char’s Counterattack.

Nostalgia aside, the film is choppy, confusing and hard to watch. Given the wealth of superior Gundam fare now available thanks to Beez, this really ought to be last on your list and one for completists only.

3
Scrappy and nonsensical, as a film this is a low point in the Gundam saga.