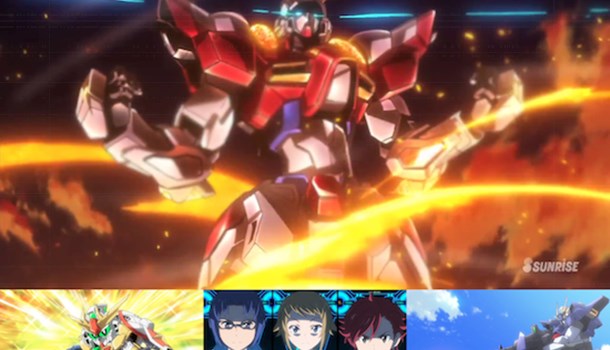 Every season there’ll be a handful of series that are produced with the main purpose of selling toys. These are the kind of shows that are usually ignored by western distributors and streaming websites, but are a fairly common occurrence in Japan. That isn’t to say all shows with merchandising in mind are instantly bad though, and there’s no better example of this than Gundam Build Fighters. Last year this 25-episode series went down a storm with Gundam fans and newcomers alike, and now it’s back again for a second season to help celebrate the franchise’s 35th anniversary - now going by the name of Gundam Build Fighters Try.

For those unfamiliar with the world of Build Fighters, this is a universe like ours where Mobile Suit Gundam is a long-spanning mecha franchise that has also spawned thousands of different model kits (nicknamed “Gunpla" by fans) in various shapes and sizes. The big difference though is that here they have the technology to bring these model kits to life, and have them do battle in virtual reality worlds. Things like build quality and paint attribute to a gunpla’s performance, so the more customising you do to your kit, the stronger it will be.

Gundam Build Fighters Try takes place seven years after the events of the original series, with the sport of Gunpla battle now more popular than ever. However, since then the rules have also changed somewhat, with teams of three now competing for the title of World Champion. Unfortunately for Seiho Academy (former school of champion and first series protagonist Sei Iori), their Gunpla team only has one member - tomboyish third year Fumina Hoshino.

Her luck changes when transfer student and martial artist Sei Kamiki arrives at the school, as she is quickly able to interest him in the world of Gunpla battle. Lacking the skills to build his own custom kit, he immediately takes a shine to one he finds hidden in a trophy inside their clubroom. This is no ordinary Gunpla though - this is the Build Burning Gundam, a model designed and built by Sei himself.

When the combination of the Build Burning Gundam's power and Sekai’s martial arts prowess proves explosive, the club also gains the interest of Yuuma Kousaka, a childhood friend of Fumina who inexplicably gave up the sport years ago to focus on strictly building competitions. With him and his Lightning Gundam, the three students are able to form Team Try Fighters and set their sights on the world championship title.

On face value Gundam Build Fighters Try probably doesn’t sound all that special - after all, “tournament arc” style stories in anime are hardly uncommon and more often than not they always head in the same direction (i.e. the protagonist winning and becoming champion). So while the path of Team Try Fighters might be all too-clear from the get-go, Build Fighters Try keeps the audience's attention by making the fights as flashy as possible and the characters memorable. Even in moments of downtime everything is kept interesting, whether it's taking a little comedic interlude or encouraging its viewers to buy more toys through showcasing how fun building Gunpla can be. Despite being a sequel, Build Fighters Try also works rather well as an entry point for newcomers, with references to the previous series minimal and well-explained whenever they do crop up.

Another aspect Build Fighters Try should be commended on is its gender balance, which is something quite rare for shows targeted at mecha fans. Although a clichéd love-triangle quickly develops between Fumina, Sekai and Gyanko (a recurring character that shows up in episode three), the female fighters time and time again prove to be just as vital and competent as the males. Sekai arguably may be the core character of the show, but Fumina is the one that brings the team together and sets everything in motion.

The only real problem this second season exhibits so far is that it may seem to be a bit scared of truly taking on an identity of its own. The format of the Gunpla battles may have changed, but the overall story still seems to be closely following the path of the original. For those getting into the show through this season it isn’t a significant problem, but fans of the original might find the way things are progressing so far a little bit on the predictable side.

But, despite Build Fighters Try being a show that’s cleverly been crafted to shift as many model kits as possible, it’s still very much a loving tribute to all things Gundam. Suits from all over the franchise’s long history make an appearance, all with a brand new spin thanks to customisation from their respective builders. Fans of the cold, military-tactics of the main Gundam timeline will be appeased with Yuuma’s Lightning Gundam, while those who prefer the over-the-top super robot-esque spin offs like G Gundam have the Build Burning Gundam to look forward to every week. Meanwhile Fumina’s Winning Gundam will ensure you never look at those super-deformed Gundam kits in the same way again.

The best thing about all these references and homages to past Gundam shows is that they’re something that can be appreciated by fans and newcomers alike. While the veterans can smile and cheer at the show’s commendable attention to detail, newcomers can watch the series through the eyes of Sekai and get a taste of what to expect from the Gundam franchise through the numerous suits on show - this way they can pick out their favourites and then seek out the older shows that appeal to them most. This two-way approach is something that all franchises celebrating a milestone anniversary should strive for - it doesn’t just keep the existing fans happy, it welcomes new ones into the fold as well.

Another thing you won’t usually find in a “made to sell toys” anime series is particularly impressive animation. Instead, those shows are usually made on a noticeable budget and any mecha action featured in them will be via some nasty looking CGI. However, Sunrise treat Build Fighters Try just as they would any other Gundam series, with the show featuring sharp visuals and some beautifully animated fight sequences. The explosive arrival of the Build Burning Gundam in episode one isn’t just a one-off to entice new viewers into watching more, it’s an example of just how good the show can look.

To conclude, while the majority of the Gundam franchise has built itself on a reputation for intergalactic politics and gritty war settings, Build Fighters Try tosses that to one side to make fun the top priority. Acting as a perfect tribute to the merchandising that has helped keep Gundam one of the biggest anime phenomena in Japan, if anything deserves a pass for trying to make a bit of cash on the side it’s this.

You can currently watch Gundam Build Fighters in streaming form on YouTube.

8
An incredibly fun show that doesn't seem to want to stray too far from its predecessor, but if it isn't broken - don’t fix it!