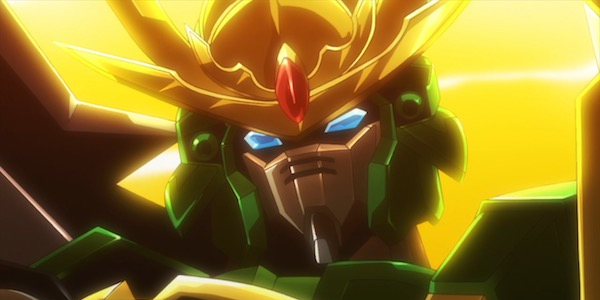 In addition to being one of the pioneer shows in the mecha (and arguably anime in general) genre, one thing you have to respect the Gundam franchise for is its ability to turn blatant product placement into something special. It's no secret that it probably wouldn't have survived all these years without the help of Bandai and its legion of "gunpla" model kits, and in recent years even the show itself has come to truly recognise this in a number of gunpla-centric spin-offs. As well as a vehicle for selling toys 2013's Gundam Build Fighters turned out to be a thrilling love letter to the franchise as a whole and, though its sequel series Build Fighters Try didn't reach quite the same dizzying heights, it still showed that same love for both the show and the hobby. In 2018 Bandai and Sunrise are back at it again for an all-new instalment – combining models, mecha and virtual reality in the curiously titled Gundam Build Divers.

Seemingly detached from the previous two Build Fighters instalment, Gundam Build Divers sees the world of gunpla battling move into the realms of VR with Gunpla Battle Nexus Online – a fully immersive space where players can use their gunpla to battle players from all over the world. The story follows 14-year-old Riku Makami and his friend Yukio Hidaka as they take their first steps into the game, inspired by the battles of "Gunpla Force Battle Tournament" champion Kyoya Kujo.

While all of the Gundam Build Fighters series have loosely followed a generic tournament-style storyline, each one makes sure to change the dynamic enough to not make it too repetitive. The original played it relatively straight, while (true to its name) Build Fighters Try tried to mix it up with three-on-three team battles. However it's Build Divers that offers the biggest changes of all, capitalising on the currently popularity of virtual reality in media and having the series take place almost entirely within Gunpla Battle Nexus Online. Here not only are real-life model kits scanned and imbued with all manner of abilities (many of which depend on the quality of the build, paint, custom parts etc.) but players recreate themselves as an avatar of their choosing. Unregistered players are humorously put into a default Haro (the franchise's iconic spherical mascot robot) body, but for those with an account the possibilities are endless. Whether you’d like to be a catgirl, a muscular anthropomorphic animal, a ninja or just a cooler version of yourself with better clothes, Gunpla Battle Nexus Online has you covered. Thanks to this the variety Build Divers has to offer is effectively limitless both in scenery and character design, making it far more diverse and interesting show from a visual standpoint.

The added dynamic of Gunpla Battle Nexus Online also makes the challenges the characters face that little bit more relatable. While nothing will ever compare to the sheer lunacy of Build Fighters' "gunpla mafia", the idea that our heroes have to face off against challengers that pick off weaker players for experience or those that snipe missions at the last minute works a lot better in the context of the setting. It's a shame that the series feels like it'll inevitably lean into a more straightforward tournament setting as the story progresses and Riku's clan is fully formed, but these early episodes of the group travelling around and completing various missions are a lot of fun.

The trade-off for such a unique setting for a Gundam series is that the characters so far are pretty bland. Riku is about as generic a protagonist as you can get, while Yukio has offered little to the series so far other than be the walking Gundam encyclopaedia to point out references for the uninitiated. Joining them so far are the "mysterious girl" Sarah (a trope these shows have already done multiple times), and Momoka – who currently also doubles as the show's only female pilot. Much more interesting are the show's supporting cast, made up of the more experienced gunpla fighters. But even in their case the main appeal lies in their designs rather than the characters themselves, and if you took away those you're left with even more characters who fit far too comfortably in these tournament show archetypes.

Of course none of this matters at all if the fight sequences aren't up to scratch, and thankfully Sunrise are still pumping out some great looking action sequences to keep mecha fans happy. If you're new to these shows the big draw here are the variant versions of existing Mobile Suits, many of which are then of course available as model kits you can buy and build yourself. Riku's suit of choice is the Gundam 00 Diver (a custom 00 Gundam), while Yukio's is the GM III Beam Master (based on the RGM-86R GM III from Gundam ZZ). Some of these variants may amount to simply differing paintjobs, while others benefit from an array of new parts to make them seem almost wholly unique. So far the show is showing particular love to both Gundam AGE and G Gundam, the former being notable due to its absence from the previous Build Fighters shows (assumed to be due to rights being tied up with co-creators Level 5). Meanwhile despite being well-loved the absurdity that is G Gundam seems often forgotten about by Bandai, so for fans of that show it's great to see new versions of the Devil and Tequila Gundams show up.

As with the previous gunpla-centric Gundam shows, just what you get out of Gundam Build Divers is going to depend on your interest and experience with the franchise. For long-time Gundam fans this is a fun little spinoff filled with Easter eggs that span the franchise's 39-year history, while for the newcomer or more casual fan it’s a chance to see some cool fights (and even cooler mecha) without having to trawl through hundreds of episodes. It might seem throwaway to some, but these shows act as the perfect gateway for new fans – both for the shows and the joy of model building. I owe my love for the wider world of Gundam to the original Gundam Build Fighters, so if this series can do the same for others than it'll be far from a wasted venture.

You can watch Gundam Build Divers in streaming form via Crunchyroll

7
Despite a new coat of paint it's still the same Build Fighters, and that's by no means a bad thing.
COMMENT AND DISCUSS
blog comments powered by Disqus