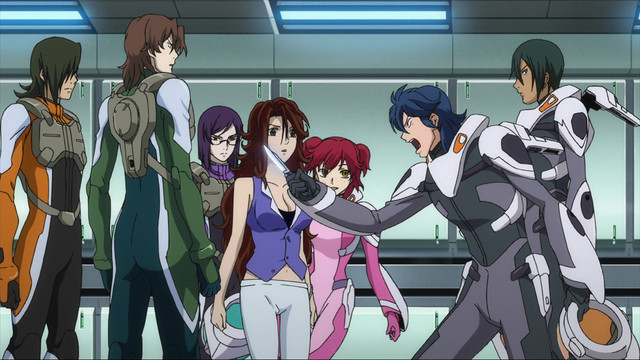 Time for another Gundam reboot! The new series, Gundam 00, is set in 2037AD, with the world divided into 3 major factions - the AUE, which is basically Europe, the Human Reform League, which covers Russia and China among others, and the Free Nations Union, which contains the USA, Japan and Australia.

With Earth's fossil fuels practically depleted, humanity turned to solar power and built giant receivers which are controlled by the 3 major powers and their allies. This power imbalance has lead to wars breaking out in non-aligned countries over the precious remaining resources, and political shenanigans are rife.

As the series begins, we are introduced to an independent faction called Celestial Being, a clandestine group who use their superior Gundam mechs to wage war on... well, war actually. Over the course of the first 9 episodes we see the reactions within each of the Earth's super-powers to being kicked heavily into submission by this organisation and their "Gundam-Meister" pilots.

Phew, all sounds very political and complicated doesn't it? But then, every Gundam series features a heavy dose of politics, and at least Gundam 00 takes a new approach. It's all very different to the rag-tag crew battling through space in the Archangel from Gundam SEED, but despite my initial reservations, I've come to really like this new take on the Gundam universe.

I was told that the series had overtones of Gundam Wing, a series I never much liked to be honest. Having watched 00, I can't say I see many parallels myself, and in my opinion that's a good thing. Yes, the series lead Setsuna is, like Heero Yuy, a bit of an Emo nightmare, but the initial episodes introduce a large and varied cast that makes his presence less annoying than you might imagine.

The other three main characters, Allelujah, Tieria and the fantastically named Lockon Stratus make for a good team - mysterious everyman, stern unlikeable nerk and laid back cool dude respectively, the dynamic between the 4 (including Setsuna) works well and provides some entertaining dialogue.

The team are supported by their ship, the Ptolemaios, which is staffed by specialists (mostly cute girls actually). This gives the Meisters a home in space when they aren't in hiding around the Earth. The crew get some serious fight-sequences in before the end of this volume, and I can't wait to see how certain relationships develop.

There are so many factions and characters moving around in these first 9 episodes that to go through them all would take more room than this review allows, but suffice to say there's plenty to keep your interest, and while things do move slowly, there are plenty of big battles and some intriguing plot twists being signposted, most of which had me dying to see more.

The animation is as good as you'd expect, and (sadly) makes Gundam SEED look rather dated. Everything is very crisp, and the Gundam's themselves have a level of detail that puts other mech shows to shame. Mecha fans should enjoy the new Gundam units, each of which has a specialty that's neatly implemented in each design.

The dub is, as you'd expect from Beez, of a high standard. It did take me a while to get used to voices from SEED being used on new characters, but if you prefer your anime dubbed, then the series should be more than watchable for you, even if the script is occasionally very cheesy.

So really, all you need to know is this: It's Gundam, it's very shiny and it's very complex. If that's how you like your Sci Fi (and Lord knows I do) then jump in.

Our review copy was the Special Edition release, which includes a storage box, the 2 disc release in another premium box, a Celestial Being patch, key-holder and a model of Setsuna's Exelia Gundam. Whether these items are worth the £54.99 asking price is really down to you, but to be honest the regular "vanilla" edition is probably just fine for most people.

9
Everything Gundam should be - huge cast, lots of politics and big battles. Fans should be pleased.
COMMENT AND DISCUSS
blog comments powered by Disqus