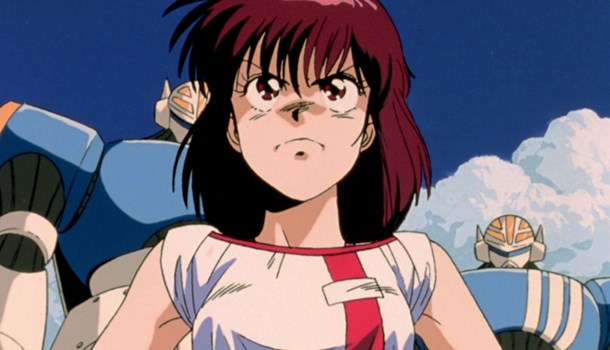 If Neon Genesis Evangelion was the New Testament, then this is the Old. Many people saw Evangelion as Hideaki Anno's remake of this, his 1988 six-part space opera about cute girls and giant robots. Justifiably famous for pioneering the "jiggle" effect beloved of many ecchi anime producers, there is far more to Gunbuster than that.

Noriko Takaya is the orphaned daughter of a famous space hero, yet seems to have inherited precisely none of her fathers ability. In her lessons at school she sends her RX7 robot into a series of patterns more closely resembling a breakdancer after the eighth pint than accepted military manoeuvres. Yet Coach Ota, who fought with Noriko's father against the alien invaders, senses potential within her and teams her up with the number one pilot, "big sister" Kasumi Amano, to pilot the Gunbuster, mankind's last hope.

As the series progresses Noriko matures rapidly, watching her classmates grow old while she stays young due to the effects of lightspeed travel, and finding someone to love only for tragedy to strike.

Kasumi meanwhile develops a keen, but friendly rivalry with another top pilot, Jung Freud (and this was before Anno's famous four year break, remember ;)

Naturally an anime made in 1988 is showing its age stylistically by now, but Gainax did a beautiful job, a perfect example of script, animation, music and subtitling in perfect harmony. There are so many nice touches, like the science paper being scrolled across the screen whilst a karaoke competition is held in the background, and the short pseudo-science lessons delivered by SD versions of Noriko, Kasumi and Ota at the end of each episode. The monochrome widescreen finale still has me welling up every time I watch it, and I've seen it a LOT. Surpassing even Evangelion in my opinion, Gunbuster is nothing short of fabulous.