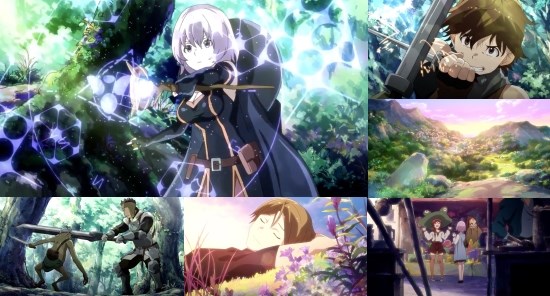 Grimgar of Fantasy and Ash follows a group of teens/young adults who are trapped inside a fantasy RPG game. This may sound like a familiar concept – the popular series Sword Art Online also tells the story of people stuck in an MMORPG. Grimgar of Fantasy and Ash is even produced by the same studio as Sword Art Online, but that is as far as the similarities between the two go.

Whereas in Sword Art Online all players are fully aware of being trapped inside a game, players in Grimgar of Fantasy and Ash are not. Besides their own name, they don’t hold any memory before their awakening in a mysterious tower in Grimgar. This differentiates the two series significantly, as well as adding an interesting element to the series.

After their awakening, the group of then still strangers are told they’ll have to join the Reserve Army in order to make a living. Doing nothing is not an option – in order to eat, you’ll have to earn money, and protecting the town from monsters seems to be the only way in doing so. Whilst the stronger looking people take off as a team (known as a ‘party’), this leaves Manato, Haruhiro, Yume, Shihoru, Ranta and Moguzo to team up. With Manato as their party leader, they set off in to the world of Grimgar.

We follow the story mainly through the eyes of Haruhiro, who narrates every episode. Despite the fact it isn’t outright mentioned (yet) that the six youngsters are trapped in a game, the viewer get many hints. Those familiar with MMO games will recognize many aspects (such as choosing a class, forming parties, entering dungeons and fighting monsters) and terms used in Grimgar of Fantasy and Ash from gaming. For those who have limited to no knowledge about MMORPG games, Haruhiro’s narration provides enough information to still being able to follow the storyline.

With their main goal to defeat monsters threatening the town, the six party-members must join a guild and choose a profession. Haruhiro becomes a Thief, Yume a Hunter, Shihoru a Mage, Ranta a Dark Knight, Moguzo a Warrior, and party-leader Manato a Priest. Each profession comes with their own perks – a warrior can charge enemies thus distracting them from party members, a thief can sneak up on enemies and priests can heal allies.

Admittedly, the story starts out quite slowly. We see the team struggle and unable to defeat even one monster, and the main characters even come across as cliché at first - Shihoru is the typical shy girl, Yume’s a bit of a tomboy, Ranta is the brash and impulsive one, Manato serves as an always righteous leader, Moguzo is the timid big guy, and the main character Haruhiro is a neutral, almost bland character. There are some scenes in the beginning of the series that seem to be pure filler, adding nothing to the storyline whatsoever. For example, we see Ranta going on a rant about how he can ‘only forgive girls who disguise their large breasts’, and a painfully unnecessary scene about Haruhiro wondering if the girls are wearing any underwear and if he should tell them to wear different clothes.

Luckily the story picks up after the party finally succeeds in killing their first opponent. Since nobody is aware of being stuck in a game, everything is real to the party – instead of some meaningless pixels they see a goblin fighting for its life, not wanting to die. After a bloody slaughter, we see all characters affected by having killed a living being. This allows the characters to be more relatable, as well as adding more depth to them.

As mentioned before, doing nothing in Grimgar is not an option. The party must keep killing monsters (which, luckily for them, seems to be getting easier after every kill) in order to earn copper and silver (or even gold) to buy food or better weapons and armour. Besides currency, players also earn ‘Vices’, which allows them to learn new skills within their chosen profession.

Despite the somewhat slow start and a few unnecessary scenes, Grimgar of Fantasy and Ash does manage to keep viewers interested. Along with the main cast, we slowly learn more about who they might have been before waking up in Grimgar. For example, Moguzo thinks he used to cook for others, Manato thinks he used to have great affinity with alcohol, the thin Shihoru is adamant about being ‘really fat’, and Haruhiro is certain the red moon in Grimgar is nothing like the moon where he came from – wherever that may be. Occasionally the main characters will say a word (such as “game”), immediately followed by wondering where they got that word from, or what it means. Haruhiro even briefly wonders where his cell phone is, followed by wondering what a cell phone is.

With visually pleasing pastel-coloured backgrounds and many medieval influences, Grimgar of Fantasy and Ash succeeds very well in depicting a fantasy setting. Despite the girls’ bodies being a topic of conversation a few times in the series, all but one female character do wear appropriate clothing – no plate bikinis have been spotted so far. Males also wear armour that is somewhat realistic instead of overly exaggerated as is often seen in MMO games – apart from some characters wielding a weapon almost bigger than themselves that is. Some scenes show the characters drawn a little blandly, but overall (and especially during fighting scenes), the animation is a pleasure to watch. The few critters and monsters seen so far add to the rich fantasy setting and made me curious what other fantasy creatures we’ll (hopefully) get to see throughout the series.

Five episodes in, the cast hasn’t been tasked with any major quests yet, nor has anyone discovered their personal history or being trapped inside a game. However, I have high hopes the pace of the story will be picking up soon (a major change of events in episode four further fuels this assumption). Grimgar of Fantasy and Ash has a lot of potential and I’m eagerly waiting to see how the rest of the story will unfold.

8
A slow start gives way to an intriguing series that seems to have much to offer.
LATEST REVIEWS