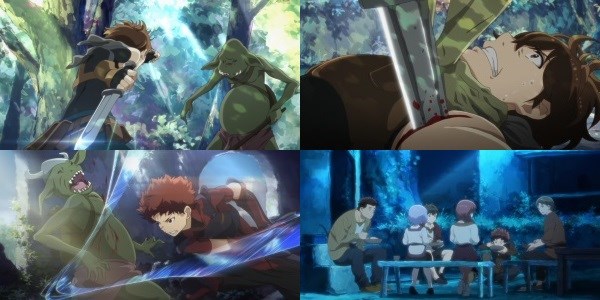 Grimgar: Ashes and Illusions follows the struggles of a group of people who suddenly find themselves trapped in a fantasy world… What a surprise! What sets this series apart from the myriad of other fantasy world shows is how it handles that setting. Most shows of this ilk use their setting as the backdrop to a power fantasy, perhaps showcasing the protagonist using knowledge from the real world as some kind of cheat. We've seen this done fairly recently with shows such as Death March to the Parallel World Rhapsody and Trapped in Another World with my Smart Phone, to name but a few. Grimgar: Ashes and Illusions takes the opposite approach, showing life in another world as a struggle to survive, with the protagonists having to learn a new way of life just to live a day to day.

From the outset we see that while the cast of characters know they are from another world, they cannot fully recall their past lives. This is done very subtly, by using certain words and phrases in conversations and having characters wonder what the actual context of what they just said meant. Other than this most characters don't dwell on their past life too much, that is except for the main protagonist of the series Haruhiro. While thinking about his current life he starts to muse on ideas such as; is he different from who he was before? While there are a few scenes of Haruhiro reminiscing about his past, there doesn't seem to be any sense of longing to go back home. Instead we see the characters focus on their daily lives in the new world and the steps they take in order to live out their lives. This is another aspect of Grimgar that sets it apart from other similar fantasy shows: there doesn't seem to be an overall goal of going home, defeating a demon lord, or being the strongest. It's all about survival.

Haruhiro forms a party together with a few members from the group of strangers, who have found themselves in Grimgar. Each member takes up a specific class of character, as you would find in an RPG. Haruhiro takes up the thief class that specialises in using daggers and sneak attacks, whilst others become hunters, magic users, warriors, etc. in order to fill out the needs of an overall party. The series starts by showing their haphazard attempts at hunting goblins in order to earn enough money to buy food, new supplies, skills, and necessities. This is the real core of the show. Having the characters work together, develop, and grow not only as hunters but as characters.

Grimgar: Ashes and Illusions cleverly shows the struggles of their new way of life in how it displays the characters efforts with killing their first monster. Rather than taking queues from other fantasy shows - where we see the characters display some kind of hidden power, or natural aptitude for adapting to their new environment - Grimgar: Ashes and Illusions is more pragmatic and shows how serious the act of fighting a monster is. The show gives a tremendous amount of weight to each encounter the party faces, even showing that the monsters they face have their own thoughts and feelings. This is achieved via simple things such as showing them relaxing around camp-fires and talking in their own language and cautiously patrolling the area to make sure things are safe. When the encounters do happen the monsters react in a way that could be seen as human. This is such a prominent point that other characters comment that monsters are just like them and don't want to die.

This gives each battle in Grimgar: Ashes and Illusions a certain weight, which really heightens the peril and tension. This combined with some really smooth animation, character reactions, and an excellent soundtrack really gives the show a sense of depth and a sombre tone you wouldn't normally get from this kind of show. Speaking of which, the use of music in this show is fantastic. After the party's first “win” we don't get a great celebration and fanfare but instead a melancholic melody, used as the basis for a scene of the characters reflecting on their actions for the day and how they feel moving forward. With this Grimgar: Ashes and Illusions manages to get a tone just right that is action adventure mixed with deeper themes of sadness, co-operation and recovering after tragedy.

Similarly the art style helps to convey these themes as well. It is gorgeous, the backgrounds look like they've been lifted from a watercolour painting. This really heightens the fantasy world concept, yet at the same time gives the show a style that can really fit with the more sombre and dramatic moments. With regards to the English dub, it fits the show really well. The characters are able to convey the required emotions and even pull off some nice comedic moments, during the more light-hearted sections. In both English and Japanese the show boasts rather impressive audio such that Grimgar: Ashes and Illusions can be enjoyed either way.

Overall if you're looking for a fantasy action show that has a bit of depth to it, that focuses more on character growth than characters showing off, then Grimgar: Ashes and Illusions is a show you should definitely watch. A sombre take on the trapped in a fantasy world style show that will really leave a lasting impression, long after you've finished watching.

9
A sombre and dramatic take on the 'trapped in a fantasy world' trope, that will leave a lasting impression.