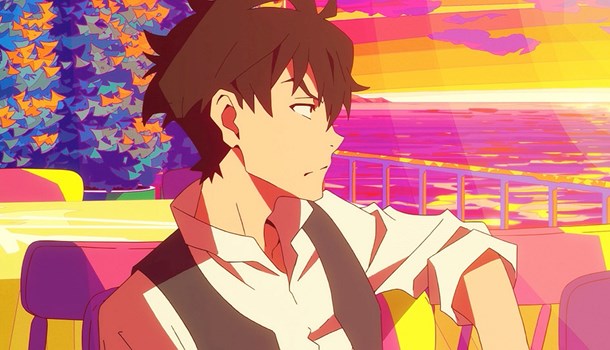 One of the things I enjoy most about con-artist shows is seeing the way in which the how’s and why’s neatly come together. It’s not enough to simply see a great robbery or con pulled off; I really want to understand why those characters feel compelled to carry them out in the first place. Great Pretender does this in superb fashion, not only weaving powerful and interesting character arcs through its broader stories, but doing so with an energy and vibe that makes it one of the most compelling anime shows to come to Netflix for some time.

Great Pretender is actually an anime original series produced by Wit Studio (Attack on Titan, The Ancient Magus' Bride), and was written by Ryōta Kosawa and directed by Hiro Kaburagi. In a broad sense, and I am very conscious of spoilers here, it tells the stories of a group of con-artists who seek to right some of the wrongs of the world, targeting corrupt individuals who have profited from the misery of others. However, as I mentioned, those cons also serve as backdrops for a much more intricate set of stories; each con sees one or two characters step into the spotlight and explore their own histories and motivations for why they do what they do.

Now, Great Pretender is certainly not the first show to do this, but I do feel it is one of the most adept. One of the reasons is because it doesn’t blindly glorify its characters for their work, instead taking a good amount of time to question their motivations at different points in the story. Can you maintain an innate sense of justice when revenge and trauma become your driving forces, for example? Again, I don’t want to give anything away, but I feel that one of the messages that the show really wants to leave us with is that, in a world where it so easy to con and cheat others, it’s vitally important that we don’t cheat ourselves and our principles. We’ll soon see how the show handles that message in its second half.

The first fourteen episodes of the show are broken down into three separate arcs, each of which has our characters taking on a new target. The plans are extravagant, the targets morally reprehensible and, as you would expect, there’s a constant swing between tension and comedy as the con artists and their targets dance around each others schemes. But, the show really does excel when it comes to presenting the intriguing personal stories that orbit the con itself. For example, though the targets themselves are certainly not worthy of our pity, they do have people around them who are, and Great Pretender does a really great job of using those characters to inject a much broader set of emotions into what would otherwise be rather black and white situation.

Much of that emotional depth is possible because the show spends such an apt amount of time on each arc. Being four or five episodes long, that gives each almost a movie-long running time to establish context, meaningful relationships and motivations, and all of the space needed for events to dramatically play out. The show’s second part takes this even further; it’s a nine-episode con that looks like it will really hone in on our main character - Makoto Edamura - and his rather painful past. Given how well he, in particular, has been written, I can only say that I’m thankful that his arc is getting the attention it deserves.

Naturally, coming from the studio that brought us Attack on Titan and Kabaneri of the Iron Fortress, you’d be forgiven for thinking that Great Pretender would also be an equally well animated series - and you’d be right. The show has a really stylised approach when it comes to its settings and backdrops, almost surrealist you could say, which nicely contrasts with its characters and makes them appear far more refined as a result. Coupled with this is an incredibly vivid colour palette that not only heightens the exoticism of each setting with it’s Vice City tones, but also helps to maintain the energy of the show when the action is taking a break. This union of nuanced animation style with vibrant tonal ranges really do make Great Pretender a compelling, visual spectacle that - much like Gonzo’s Gankutsuou - needs watching several times to fully digest and appreciate.

And that last sentiment equally applies to Great Pretender’s soundtrack which, I have to say, is phenomenal; as you would hope given the titular homage to Freddie Mercury. As fans of Cowboy Bebop know all too well, the bebop jazz tracks that Great Pretender brings to its episodes really help to heighten the frenzied cat-and-mouse dynamic that plays out constantly between the characters and their targets. But, tonally, it also fits quite nicely given that the story is about people - artists of sorts - who often find themselves improvising while carrying out their craft.

However, it’s tracks like ‘Someday’ - performed by YVY and featuring Emarie - that really do stand out, not just because of how they come into play in the show but also because of the powerful performances they are in their own right. This is equally true for another performance from the soundtrack, ‘I’ll Keep You,’ which was also performed by YVY and Emarie but not included in the show. Both of these are so different from the tone and mood of the rest of the tracks that you can’t help but feel their lyrics resonate all the more for it, and I sincerely hope we get to see them all released when the series does eventually come to DVD and Blu-Ray.

In reflection, Great Pretender’s first half is an incredibly well-crafted series. The music, the characters, the visual style, the story - each of them are vibrant and attention-grabbing in their own right. However, like so many masterful schemes - it’s when all those smaller parts and players come together that it becomes something far larger than the sum of them, and the result is something truly memorable.

10
Great Pretender’s first half is an incredibly well-crafted series, with enthralling music, interesting characters, vivid visual styles and compelling stories that come together into something truly memorable.