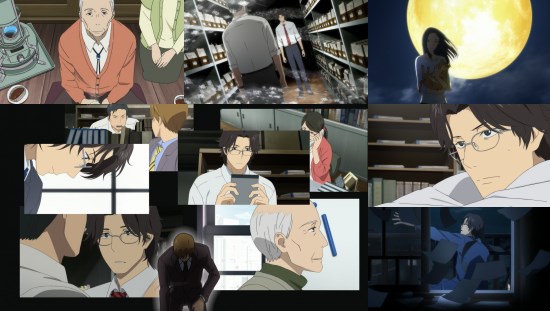 Given the hundreds of thousands, if not millions of them, which I've deployed on this web site over the past decade it may come as no great surprise to you to hear that I love words - using them, manipulating them, playing with them, and the joy that comes from discovering a new word and seeking out its meaning. It's something that we're all passionate about to some degree (just watch people engaging in the ceaseless arguments between using the turn of phrase "could care less" versus "couldn't care less"), and with good reason - in our current time written words are perhaps more important than ever as one of our primary sources of communication.

In spite of all of the importance of the written word, the actual mechanics of a dictionary and its creation may not be something you've ever sat down and thought about, although I suspect that may change very quickly if you sit down to watch The Great Passage, and embark upon its tale of the creation of a brand-new dictionary from scratch.

On a surface level this couldn't sound more boring - you just sit down and collect all of the words in existence, right? Wrong. One of the things that The Great Passage does impeccably is give you an insight into the decisions that have to be made as part of the process of compiling a dictionary - you can't include every word so have to choose those which are important or relevant; you have to pick specialisations to focus upon and areas where outside assistance might be needed to properly define the relevant words; true skill and care is required to create those definitions to make them succinct, accurate and accessible.

All of these are headaches that Editor Kouhei Araki could do without - he's all set to retire to spend time with his sickly wife, yet he can't rest until he finds someone capable of doing his job. Editing a dictionary is a very specific skill, and also one that most writers want nothing to do with, leaving him bereft of options even within the confines of the major publisher he works for. However, serendipity might have pointed him towards his ideal man - an awkward salesman named Mitsuya Majime whose considered yet passionate love of works marks him out as the perfect candidate.

Thus, Mitsuya is transferred into the dictionary department to begin work on The Great Passage, in spite of the scepticism of his new colleague Masashi - a man whose passion is not in words but in getting things done, which ultimately leads to the chalk and cheese relationship between the two blossoming into the perfect partnership to push the dictionary's creation forward.

All of this sets the scene for a series filled with beautifully understated drama. Threats to the dictionary's publication aren't dealt with by wailing, shouting and an overblown sense of crisis, but by staff quietly getting to work to get things done and move the needle back in their favour; a love story isn't packed with misunderstandings in crisis but works itself out in the fullness of time; a miscalculation in the print stock to be used is a small but vital example of the dedication of Mitsuya and the devotion it instils in those around him rather than a full-blown crisis. The closest the show comes to a major drama is a missing word in the dictionary discovered during proof-reading (it's a bigger deal than it sounds in writing), but even this is handled with a subtlety that most anime wouldn't even try to match.

Thanks to that sense of restraint, The Great Passage instead allows its characters to shine through. Although Mitsuya is our protagonist here, who enjoys an epic journey of his own from put-open salesman to distinguished dictionary editor, it's some of the other characters who arguably steal the show. Masashi Nishioka is the real highlight here - a man who initially seems rather boorish but turns out to be a star in his role of greasing the wheels and manipulating things behind the scenes to ensure those with the real talent for creating the dictionary never have to get their hands dirty. In a sense, his story is the real crux of the series - that passion can take many forms, as can its expression... expression that relies, of course, heavily upon words and their meaning.

There's also a real sense of scale to the project we watch being undertaken - it's imperceptible at first, and the series never openly makes a big deal out of it as you might expect it to, but this is a story which spans years and even decades. Relationships grow and blossom into love and family life, characters age markedly both inwardly and outwardly, and the world continues to turn apace. The subtlety with which this is presented is a pleasing element that permeates every element of its story, as it always takes the route of trusting the viewer to pick up or intuit its nuances rather than explaining them or shouting them from the rooftops.

This makes its shifts and changes over time truly pleasing, and even rewarding, to watch - when you suddenly have a moment of clarity on a particular relationship or the full extent of the events you've been seeing, it feels like you've earned that little gem of story-telling for yourself rather than it having been spoon-fed to you. All of this pulls you forward quietly and insistently through to its bittersweet and poignant ending - a reminder that all things come to an end, but that the end can give way to a legacy that will last many more lifetimes.

Visually, the series shares a character designer with the magnificent Showa Genroku Rakugo Shinju, and its characters fit the series like a glove - they all feel real and "lived in", and are suitably expressive without most of the usual overstated anime stylings. The show's broader aesthetic is a comfortable one - its attempts as visual metaphor is perhaps its clumsiest element and it sometimes overused, but for the most part it fits nicely. As you might expect of such a series, its musical soundtrack is understated, save for a blaring opening theme which really doesn't suit it at all.

If you're in the mood for a pleasant, thoughtful and occasional touching series that paints a subtly beautiful picture of life, work, passion and creativity, then The Great Passage is an absolute triumph in all of those regards. It isn't just a breath of fresh air compared to all of those high school anime shows but a wonderful tale in its own right that will reward you for every iota of thought and concentration you spend on it. It's actually difficult to find a suitable adjective that will succinctly sum up just how effective the series is at achieving its goals - if only there was some kind of book of words that could suggest one for me...

You can currently view The Great Passage on Amazon Video.

9
A quietly confident and subtle story that transcends its subject matter - you could fill a dictionary with words describing what The Great Passage does well.
LATEST REVIEWS