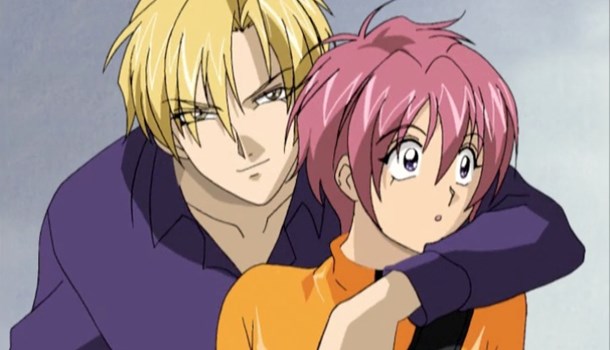 It's never easy trying to review anything that isn't aimed at you. I have to look at the target audience and figure out if the product I'm evaluating is excuted to a high standard and what stands out about it. Sounds simple, until you get to Gravitation, which is essentially a story about rock and roll mixed with homosexuality. As a genre, Yaoi is well established in Japan, but who, in this country, could the target audience actually be?

Shuichi Shindou and his band, Bad Luck, are trying to make it big. Shades of Beck abound initially, and in an unusual move the series features live action sequences for scenes depicting crowds or fast action (such as running), shifting back to anime for the dialogue. It's a bit jarring, but it makes the series stand out - you'll have to decide for yourself if it was done for budgetary reasons or for the sake of style.

Anyway, the series follows the band as Shuichi meets (and falls for) an older guy called Eiri Yuki, a famous novelist, who initially rubbishes Shuichi's lyrics but drives him on to achieve greater things.

Gravitation then follows the relationship between the two and the people that surround them - from Shuichi's supportive best friend and band member Hiro, to an American named K who wields a gun and uses random Engrish phrases. Oh, and some 30 year old guy with a giant bunny.

As you can possibly tell, it's not to be taken too seriously.

My problem was that I disengaged from the series, and I really didn't want to. I'm not homophobic, but I don't have much interest in watching a gay love story, and that's essentially what this is. The marketing blurb describes the series as created for a female teenage audience, and being neither I imagine that's why I had problems with it. I found Shuichi annoying, with Eiri distant and, on occasion, cruel. It's hard to engage when you don't actually like the central characters.

Now, the target audience may well feel differently. The boys are all very pretty shoujo stereotypes and they gaze wistfully at the drop of a hat. Shuichi's energy makes him appear very cute, and the stoic Eiri is a perfect brooding male for those that like that in a man. The music is Jpop inspired and fairly catchy, but other than the premise and the live action scenes, it doesn't really do anything Beck doesn't do better, be it in the plotting or the characters themselves.

I feel a bit guilty grading this at all, but I couldn't find a single person who fit the bill, and rather than have the series bashed unfairly, I decided to sit through it myself. I'm a bit worried for the series - it's very niche, it's not naughty enough to really excite a young female audience and it isn't gripping enough to make me want more.

I expect there will be a hardcore of fans who love Gravitation, and for them I'm happy it made it to the UK. Based on likely sales, I'm not confident it's an experiment that will be repeated.

6
Not my cup of tea but I'm willing to bet a niche market will love it.